Terrene Tires sent us both versions of the Elwood gravel tires last year and we really liked them. When we were communicating this definite like of the Elwood to Terrene, we also asked if they would make a version suitable for 29″ers/monster cross bikes in the 2″ range. We were told to hold tight. Something was coming that we might find interesting. That “something” has arrived and it is the Honali. Not the mythical place in the “Puff The Magic Dragon” song you may remember, but the Honali that is black, round, and fits a bicycle. 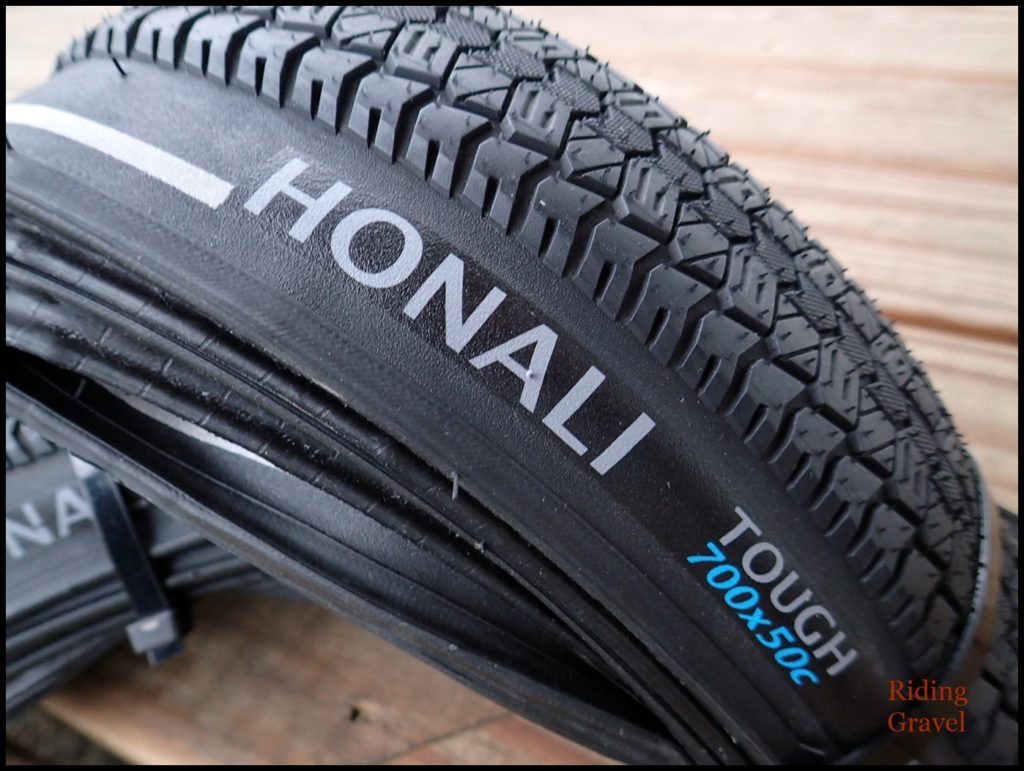 The Honali tires are not specifically billed as gravel tires by Terrene, but in the sense that Terrene intended for them to be used anywhere touring across the globe, one would have to imagine many of those roads are dirt and/or gravel. The tread pattern also points to a gravel usage since it was inspired by dual sport motorcycle use, and those are often off pavement. You can go read about the design intentions and glean some technical information by clicking HERE to read our introduction post on the Honali. 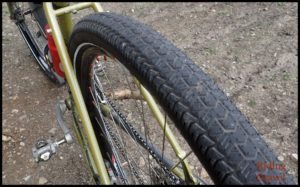 While not a “true” gravel tread, the Honali looks like an interesting tire for gravel travel.

We received the “Tough” version of the Honali in the 50mm width. It has the Tekshield puncture protection, the tubeless ready casing, and a nice bright reflective stripe on both sidewalls. Our samples weighed in at 702gm and 709gm each. That seems a tad heavy, but when you compare it to tires that are in the 40mm-43mm range we’ve tested with any sort of puncture protection and that is probably about right on for weight. The Honali is an honest 50mm wide tire as well. After a day or so at 40psi, (not a very high pressure for a tire rated to almost twice that pressure), I measured it at 51.22mm on a WTB i23 Frequency rim set up tubeless. Honestly, while I like light tires as much as anyone does, the intentions for this tire include being durable, reliable, and safe. It isn’t a racing tire, after all. It is meant for touring. In that case, I’ll trade off the lightweight feature a bit for that durability and toughness if the tire doesn’t ride like a piece of wood. We’ll see how I feel about that later on into the review.

The tires mounted up easily on those WTB rims mentioned above with a floor pump. I have been on a few “getting acquainted” rides and initially I’d say that the feel of the Honali seems to be very good. After I’ve had some time on gravel roads I’ll report back with my Checkpoint update. Stay tuned……

So Far……. The Honali has that same good feeling casing as the Elwoods did and it set up tubeless rather easily on our WTB rims. It is an honest 50+ millimeter tire with pretty good volume. That dual sport motorcycle inspired tread looks promising and rolls fast on pavement. I’ll get back to you on the gravel road part soon…..