You are here: Home > Terrene Tires Elwood: At The Finish
By Guitar Ted on February 19, 2017 in Components, Gravel News, Tires

Terrene Tires Elwood: At The Finish- by Guitar Ted

The Terrene Elwood review has been a split piece for us since we got the 650B X 47mm version and the 700c X 40mm version to test out. Our contributor, MG, weighed in on the 40mm version with his thoughts which you can go back and read by clicking this link- HERE. Since then, MG went ahead and forwarded the 40’s for me to try out and now it is time to give the final verdict on both types of Elwoods. My previous thoughts on the 650B X 47mm versions can be seen by clicking the links- HERE and HERE.

Thoughts On The 700c X 40mm Elwood: Since I had not ridden the 40mm Elwood in the 700c diameter, I figured I would spend a little time giving my impressions on these tires versus the other tires in this class that I have ridden. The 40mm Elwoods were mounted to the Velocity A-23 rimmed wheel set I use on my Black Mountain Cycles bike. The tendency for tires previously used tubeless is for the bead to see a little stretching, so it was no surprise when I had to remove the valve core on my valve stems and hit the Elwoods with a shot from my small air compressor to set the tires up tubeless. Once the beads were set all else went smoothly. Now it was off to do some rides. 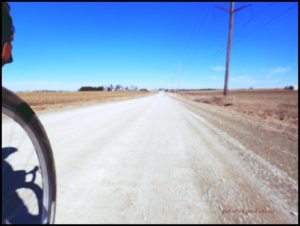 The Elwood is fast and has a supple ride on gravel.

Much of what MG said in his take on these tires holds true for me as well. Once again, the quality of the casing was very apparent. The weight for these claimed 40mm tires, (430 grams), which really are 43 plus millimeters wide, is very impressive. The fast rolling feel and the cornering traits were all things I agree on 100% with MG. What I noticed as well were the similarities to tires like the Clement MSO, Panaracer’s Gravel King SK 40mm, and the Arisun Gravel Plus. The biggest difference here with Terrene’s offering, in my opinion, is that whatever Terrene is doing with their 120TPI casing is far smoother than the others in its class. The damping characteristics in rough gravel are another level above the others. Combine that big 43+ mm casing with the lighter weight than its competitors have in 40mm tires, and this tire seems to beat anything else available today in its class.

Downsides? Well, I think the casing profile and size and shape of the side knobs are tending to make the Elwood in the 700c size a bit more of a handful in terms of handling. I felt that I had to pay a bit more attention to the handlebar, as the Elwood felt quick to steer off center than many tires I have tried. Also, as mentioned before, MG and I are in agreement that this tire is a “on-off” tire in terms of grip in aggressive styled cornering.

Thoughts On The 650B Elwood: In terms of what is available for the 650B wheeled gravel rider, there isn’t much to recommend beyond the rando-inspired designs or full on, mountain bike styled treads. The Elwood represents what is most likely the best tread design for gravel yet released in 650B. In that sense, there is no rival to this tire. 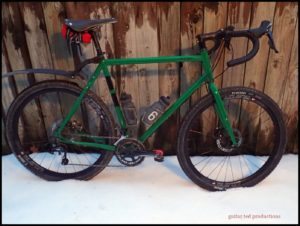 Elwoods on snow are not a recommended combination!

The 650B Elwood that I tried had the “Tough” casing, which refers to the puncture protection the tire has. The 700c version we tested has the “Light” casing, which does not have puncture protection. I think had the 650B version I rode had the “Light” casing, it would have been so ridiculously smooth it would have handily out-classed the WTB Horizon I tested last year. As it was, the “Tough” casing was on par with the Horizon. With the added stability of the tread design which the Terrene tire has, it is definitely a better choice for the rider who will be doing mostly gravel rides. I also found that the Elwood had great smooth rolling characteristics on paved roads as well.

At The Finish: Taking the Terrene Tires Elwood out on gravel is a delight. There isn’t much to dissuade a rider from choosing this tire in either the 650B version, which is one of only a few “gravel specific” tires in its class, or in the 700c X 40mm size, except for that either version may not fit the frame you have in mind. Tubeless performance is great, the tire is fast and smooth, and the ride quality of the “Light” casing is phenomenal. Only aggressive cornering will bring out the worst in this tire on gravel. Keep it calm in corners and you won’t experience a sudden dump.

Now if we could only get Terrene to make this tire in a 700c X 50mm size for bikes like the Fargo, we’d be really pleased! Seriously though, this is a fantastic first effort from Terrene, and they have a tire which is tops in its class for speed, weight, and ride quality. You could do a lot worse in a 700c or 650B sized tire for gravel riding.

Note: The Terrene Tires Elwood models were sent to Riding Gravel by Terrene tires for test/review at no charge. We are not being bribed, nor paid, for this review and we will strive to give our honest thoughts and opinions throughout.

18 Responses to Terrene Tires Elwood: At The Finish