Earlier in the year we told you about a new tire company called Terrene Tires. They planned an initial launch with three models, the Wazia fat bike tire, the Chunk plus bike trail tire, and the tires we have here on test now called the Elwood. The Elwood tires come in two sizes and wheel formats. There is a 700 X 40mm model and a 650B X 47mm model. We have both here to try out. 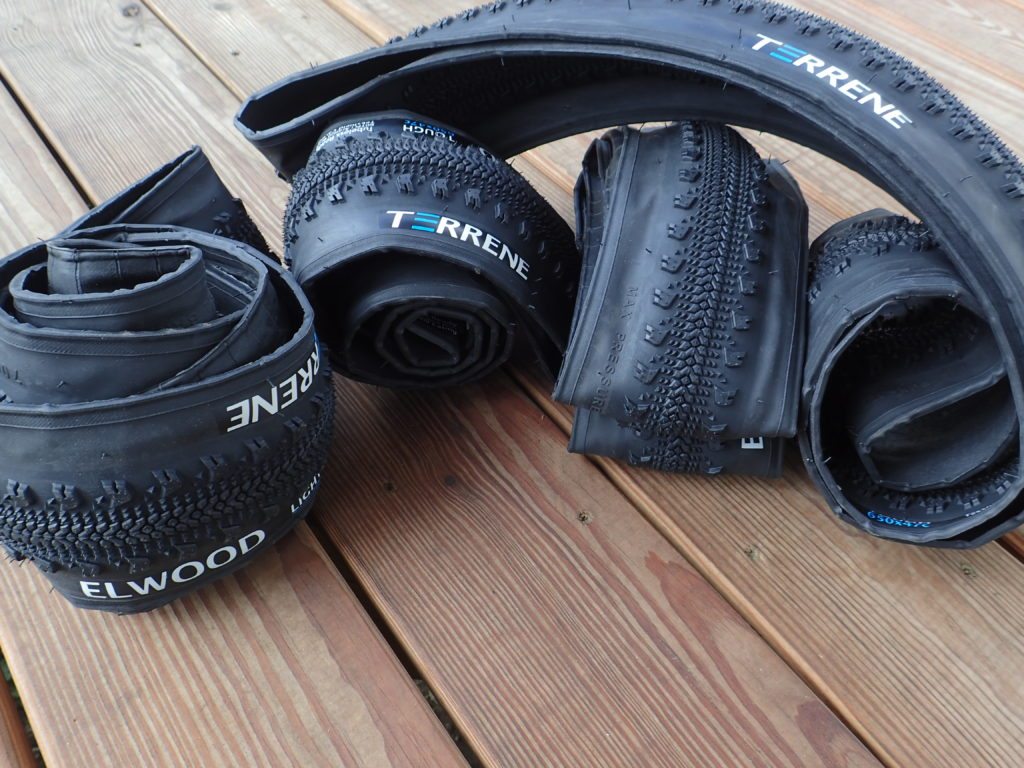 What It Is: The Elwood is Terrene Tires model for “all road”, gravel, and adventure bikes which features a tread design that promotes speed, low rolling resistance, and lugged side tread for secure cornering grip. The Elwood comes in two levels- a 120TPI “Light” version and a 60TPI “Tough” version which features Terrene Tires’ “TekShield” flat protection. Both types feature a folding, Aramid bead, 60a durometer compound, are tubeless ready, and cost $65.00USD MSRP.  Terrene Tires website says the following about the Elwood:

Elwood is our dirt road tire designed with a fast rolling tread and aggressive side knobs so that you can confidently take any fork in the road and still be in control when things gets rough.

Impressions: The Elwoods came to us in both sizes and the 650B X 47mm models are of the “Tough” variety while the 700 X 40mm tires are of the “Light” variety with what Terrene calls their “Ultralight” casing. Out of the box they immediately impressed me in terms of how supple and soft the rubber felt. It was almost unnervingly pleasing. That aside, the tread was interesting in that the central row was sort of a herringbone-like pattern. Then along side that on each side are rows of small pyramid shaped “nubs” that are a little lower than the height of the central row. Then on the outer edges you have the blocky, taller lugged tread, presumably for better cornering prowess. 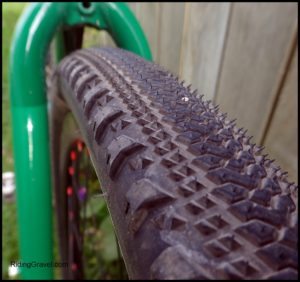 The knob shapes on the Elwood vary and are complex in nature.

The tread is reminiscent of the type of tread that Teravail uses on the Sparwood model. However; these Terrene Tires definitely are more supple. The tread pattern looks to promise a good all around “all-road” to dirt type performance. In terms of weight, the Elwood 700 X 40mm tires do earn the title of “Light” by clocking in at 440 grams and 436 grams for the pair we have on test. That isn’t as light as a Maxxis Rambler 40, but it isn’t far off those tires and is dead on for what the Clement MSO 36mm tires weighed in at. As for the 650B Elwoods, they are a bit heavier at 534 grams each. This compares favorably with the WTB Horizon tires which weighed in at 510 grams, and that was a smooth treaded tire.

Tubeless set up with the 650B Elwoods was average on the Velocity Aileron rims. No more difficult than most. Once set up, the air retention has been above average with only slight drops in pressure over a period of a couple of days. Measured at 40psi a day after mounting, the Elwoods come out to 47.7mm on the casing and 47.8 mm at the widest point across the tread blocks. this is slightly wider than the Horizon 650B tires. Fitment to the Twin Six Standard Rando was very good with a decent clearance to the chain stays but I wouldn’t want the Elwoods to stretch much at all. The profile of the tire is an ever so slightly peaked “shallow C” shape. In terms of tubeless performance, tire width, and casing shape, I came away impressed in a good way.

Ride feel is very good.The Elwood spins up fast, and the ride feel mimics the suppleness I felt right out of the box. Pressures have been set at 40psi or slightly below that for the first few rides and the initial impression I got was that these tires will provide a good ride on the gravel. Stay tuned on that front. Grip on the decayed gravel and dirt I have been able to put them on so far is excellent. NOTE: The 700 X 40’s are going to our tester in Nebraska, MG, so any impressions on those will be written up at a later point by him.

So Far……. Leaving any “Blues Brothers” references aside, the Elwoods seem to be a great tread pattern for smooth to dry dirt tracks and may even be good for buff single track. The weights are very good, and the rubber Terrene uses is the finest feeling I’ve yet handled. Tubeless set up was average on our Velocity Aileron rims.  Ride feel, so far, is excellent. Stay tuned for the gravel road performance of these tires and more on the 700 X 40mm Elwoods from MG soon.

Note: The Terrene Tires Elwood models were sent to Riding Gravel by Terrene tires for test/review at no charge. We are not being bribed, nor paid, for this review and we will strive to give our honest thoughts and opinions throughout.