The tubeless gravel road class tire segment keeps getting larger and as we reported here back in April, WTB has made good on its promise to bring the 37mm Riddler tire to light and have sent a pair to RidingGravel.com for test/review. The 45mm sized Riddler tires will make it to market in August, according to the latest from WTB. So, here we will focus on the 37mm version of the Riddler and give you our initial impressions of WTB’s latest gravel road tire model. 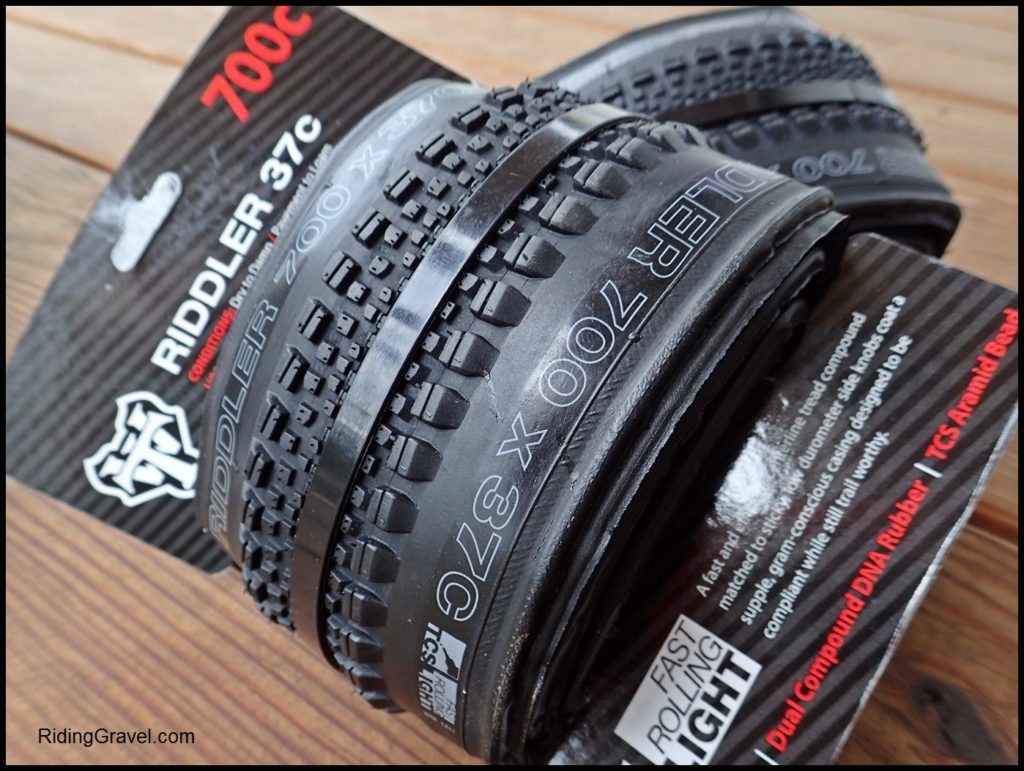 The TCS Riddler 37mm tires have a unique tread pattern reminiscent of a Clement design.

The Riddler tire first made an appearance as a mountain bike tire design and was named after WTB athlete, Nathan Riddle. The design utilizes a small, micro-block tread design in the center portion of the casing to promote speed and blocky edge knobs to give control in the corners. WTB “shrank” this design to render a similar look on a skinnier casing suitable for gravel roads and the bicycles designed for them. The center part of the 37mm version reminds us of the Clement MSO, which is a fast rolling tire, but the additional edge knobs are a bit more unusual, and only Challenge Tire’s “Gravel Grinder” model has anything similar to this. The unique combination of these two characteristics in the Riddler 37mm tire point to an interesting possibility- Fast rolling with stability in looser gravel and in corners. Will the Riddler live up to our expectations? This is what we will find out later during my ride testing.

The Riddler features WTB’s excellent TCS tubeless bead and casing design which we have had good experiences with here at Riding Gravel. The casing is WTB’s “Light” version which promotes a supple ride feel and renders the lightest tire. The tire also features WTB’s “Dual DNA” rubber compound which mixes a center section of the tread which has longer wearing attributes and side knobs that are slower to rebound and lend a stickier, higher grip feel in corners. The bead is designed for tubeless usage, has an Aramid, folding type design, and has a dimension which is based very closely to a UST dimension. This should make the Riddler a very difficult, if not nearly impossible, fit on a Stan’s rim, for reference.

The WTB website did not give us any expectations on weight, but the two samples sent to us clocked in at 460gm and 470gm respectively. This compares favorably with other tires in this class that are tubeless rated. The width of the tires inflated to 40psi on the Velocity A23 rims is 37.2mm averaged out over several measurements taken on the front and rear tire. That claimed width of 37mm turns out to be spot on. That puts the Riddler in the same territory in width and volume as the Clement 36mm MSO,  slightly smaller than a Clement 40mm tire, slightly smaller than a Maxxis Rambler, and far smaller than the Panaracer Gravel King 40’s. 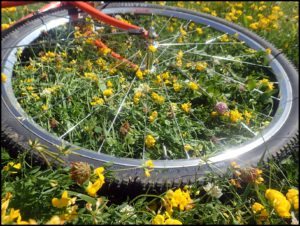 Tubeless Performance: The WTB TCS system is obviously going to be a very robust, reliable way to set up the Riddler, so a Velocity A23 was tried to see if a similar good result could be seen. The Velocity A23 has been successfully used in testing here with a TCS Nano 40 tire, so the expected result was that the Riddler would work. It not only worked, but unlike the Nano 40 tires, the Riddler went on without the need to use an air compressor, almost going on as easily as the WTB Horizon tires did on Velocity Ailerons. Air retention was very good, and so far there is no reason to believe that the Riddler won’t be at least as impressive as the other TCS tires tried in our testing so far.

So Far…… Initial rides were done with the front tire at about 38psi and the rear at 40-42 psi. The ride feel is supple, and the Riddler seems willing to damp out vibrations well. I can say that low rolling resistance is going to be an attribute of this tire, as it was easy to spin up and held speed well on my roll down test until it was interrupted by traffic. I will revisit that later, but I am of the opinion already that this tire will be a very good performer. The TCS system and tire design is well proven, and the Riddler carries on the tradition of WTB tires fitting on Velocity rims well. Gravel roads will be up next, so stay tuned for the Checkpoint post coming in a couple of weeks or so.

NOTE: WTB sent over the Riddler 37mm tires at no charge to RidingGravel.com for test and review. We are not being paid nor bribed for this review and we strive to give our honest thoughts and opinions throughout.