You are here: Home > Otso Cycles Warakin: At The Finish
By Guitar Ted on September 2, 2017 in Gravel Bikes, Reviews, Uncategorized

Otso Cycles Warakin: At The Finish- by Guitar Ted

The Otso Cycles Warakin has been packed up and sent back to the mothership. That must mean it is time for you to read the “At The Finish” verdict on this stainless steel all arounder. In the last update to this review (HERE) I had used the Warakin for a 102 mile gravel ride and found the bike to be quite capable and the ride to be very good. Here now is the final verdict on the Warakin.

Steel bikes have a reputation for being smooth and comfortable and the Warakin does not disappoint in that area. What I found surprising was how solid the bottom bracket felt under hard pedaling. I’m a big guy, so smaller, lighter folks will no doubt feel that Warakin has a stiff bottom bracket which reacts well to hard efforts. So, maybe a stiffer than normal steel here, which is probably going to surprise more people than just myself. 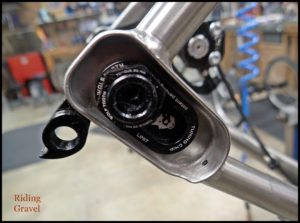 The unusual unpainted steel surface is bead blasted with some subtle graphics which I found tasteful and in stark contrast to many other brands “billboard” type graphics and loud, neon inspired colors. The graphics even survived being rubbed upon by my frame bags, so they are likely pretty durable.  It gives the Warakin a look of utilitarian simplicity.  The looks of the Warakin betray its versatility and that is a trait that one should not put aside lightly. While I did not avail myself of these things during the brief test period, the Warakin has rack mounts, fender mounts, and don’t forget the “Tuning Chip” rear drop out.

The rear drop out was left in the “long-low” position but the Warakin can be set up with a shorter wheel base which results in a slight steepening of the head angle and a slight increase in bottom bracket height. With loads of mud clearance on hand, the Warakin in the shorter wheel base setting should make for a great cyclo cross bike. There is one thing I need to clear up here concerning that Tuning Chip. In my earlier update, I stated that I thought that there was a single speed compatible chip, but there is no such thing. The folks at Otso have thought about that though, and while they assured me that a single speed Tuning Chip is possible, it hasn’t gotten enough interest to actually be produced. 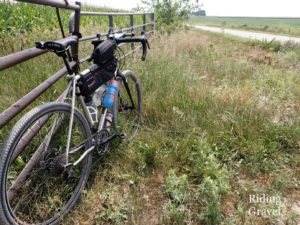 While the Warakin presents a lot of versatility, and therefore value, to the rider, there are a few things worth mentioning that are slight knocks on the bike. The third cage mount under the downtube is a bit high up on that tube relegating the end user to find a cage that doesn’t put the bottle in a place that interferes with the front tire. The chain stay flares out at a point that may cause contact with heels of riders that pedal “duck footed”. But there is one thing that may be a bigger hurdle for others.

Otso feels that the Warakin is a premium level product and that as such, its competition is not with other steel bikes, but more so with titanium bikes. Looked at in this light, the price is on the lower end of the spectrum. Frames start at $1799.00USD and complete Warakin bicycles start at $3199.00USD. Still, it is a steel frame, albeit an unusual, rust resistant, non-painted frame which has a slightly different characteristic ride than most steel bikes. I understand the appeal, but every one will have to judge for themselves how the value versus cost balance comes out.

At The Finish:  The Warakin strikes a skinny tubed profile and looks like a titanium bike. Many people are surprised that see it when they find out that it is stainless steel. The ride is classic steel- Smooth, springy, but not at the expense of a solid bottom bracket.  The Lithic fork is a tad too stiff, in my opinion, but the compliant frame tubes make up for it to a degree. (Note- Otso also offers the Warakin with a Lauf Grit suspension fork option.) Perhaps I can be accused of having a bit of a “princess and the pea” syndrome when it comes to this fork. But, as I say, the frame is smooth and composed and makes up for the stiffness up front quite nicely. The Warakin is stable and smooth for longer rides with a light load, and actually rides even better loaded up. The Warakin is an unusual, versatile bike and is ready for any adventure on gravel you can throw at it. I give it high marks for what it is capable of. The question of whether or not the versatility and unusual nature of the stainless steel is commensurate with the asking price is perhaps debatable, but there is no question, besides a couple of small nits, that the Warakin is a well thought out design.  The Warakin is really a great choice for a durable, versatile gravel grinder for anyone looking for something different than carbon fiber or the pedestrian steel and aluminum offerings out there.

Note- Otso Cycles sent the Warakin to RidingGravel.com for test and review at no charge. We are not being bribed nor paid for this review and we will strive to give our honest thoughts and opinions throughout.

9 Responses to Otso Cycles Warakin: At The Finish