You are here: Home > Redshift Sports ShockStop Stem: Getting Rolling
By Guitar Ted on May 29, 2017 in Components, Gravel News, Gravel Riding, Reviews, Stems

In the world of unpaved road riding, there is a focus of late upon how vibrations are dealt with that could have a negative effect upon the rider and on handling. Puffy tires, special frame designs, shock absorbing seat posts, and outlandish looking forks have all appeared on the gravel riding scene within the last few years. All in an effort to reduce the constant chatter which gravel roads can incur upon a rider. Now there is a stem with shock absorbing characteristics which is called the ShockStop stem aimed at doing something similar for gravel riders. 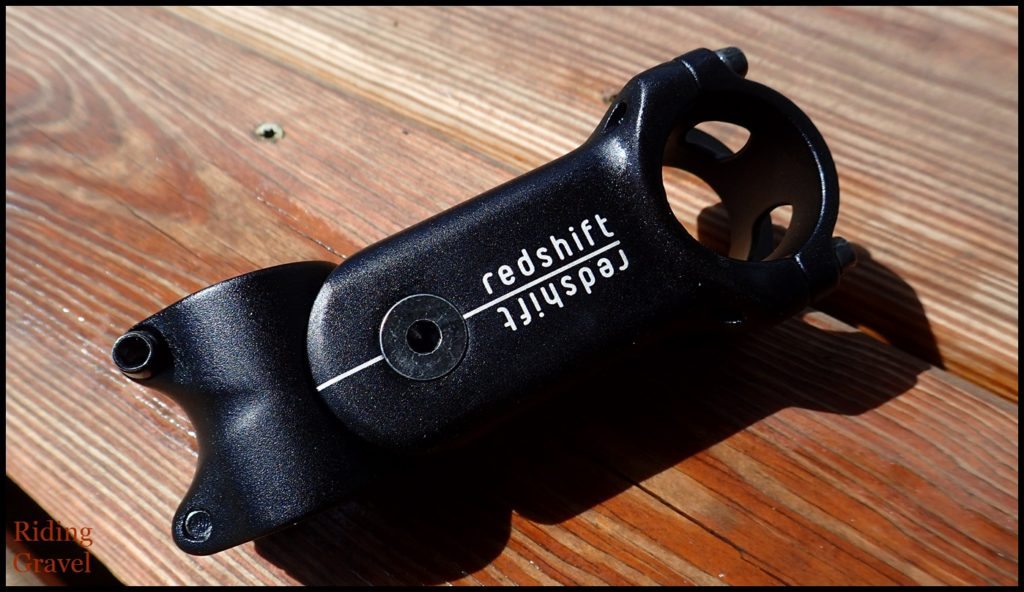 What It Is: Wait…….did you say “suspension stem”? I know…… The idea of a suspended stem might be an instant turn off for many of you that can remember such devices of days gone by. Maybe you have just heard “bad things” about suspension stems, and if you fall into one of those two groups, I feel your pain. I was the same way about this product the minute I first heard about it. However; after opening up my mind to the fact that materials technology and lessons learned may make a modern take on a stem with vibration absorbing capabilities a viable product, I decided to investigate this stem. (Spoiler Alert) I am happy to report that it isn’t anything like those awful stems we used in the 90’s on our mountain bikes. 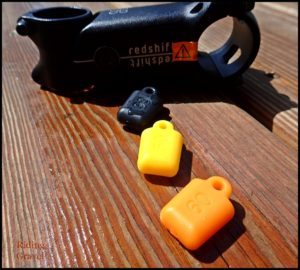 The ShockStop stem comes with five elastomers of different durometers which can be combined in many ways.

Beyond having a pivot, (which is reimagined for the purposes of this stem), the ShockStop stem also has limited travel, unlike the early attempts at suspension stems. With a maximum travel of 20mm, you shouldn’t feel as though you are going to get dumped off the front of your bike when the travel of this stem reaches its maximum.

The spring is actually a combination of two elastomers of five supplied with the stem when you get it. The materials technology behind the spring used in this stem has resulted in a lightweight, tunable product. It should be adjustable for most rider’s preferences . These elastomeric springs have also been tested to last and are less affected by heat and deformation over a long period of use. Elastomers do not have a good reputation due to their past performance, but Redshift claims the improvements implemented in these elastomers will help to change that reputation.

The elastomers come in five different stiffness rated, color coded forms, and can be combined in pairs or used singularly, to achieve a wide range of desirable vibration absorbing characteristics. The process of changing out the elastomers is a bit technical, so a thorough read of the instructions is highly recommended before attempting to switch them out. Specific instructions include a requirement to have the stem mounted to a steer tube to align a critical bolt which threads into a wedge piece inside the stem. Make sure you follow the instructions here!

The pivot assembly is another critical component to this stem and Redshift paid specific attention to this. Typically, any joint in a stem tends to get loose over time as a rider torques the bars side to side during riding. That rider induced leverage can destroy a pivot if it isn’t designed to a tight tolerance or is poorly designed. Many early suspension stems suffered from this and ended up becoming loose and unusable components in short order. 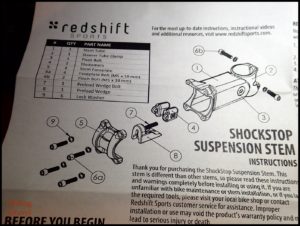 The instructions are detailed and it is highly recommended that you follow them!

Redshift worked with their bearing supplier to have a custom, full compliment enduro bearing made to be press fit into the bore on the steer tube side, which itself is carefully machined into that aluminum part. Then the shaft in the handle bar side of the stem is made much like a rear pivot in a modern rear suspension bicycle design. It is pressed in and the tolerances between it and the inner race of the bearing are very tight. What results is a stem that will not flex torsionally and will retain the feel and stiffness a rider expects. In fact, Redshift has these stems tested for torsional stiffness and they claim to have had successful results throughout their observations. The stem still moves around that pivot up and down to allow for the vibration eating benefits though.

That pivot has seven parts to it, and there are actually two enduro bearings and a shaft spacer in there as well. Add in a wedge bolt, wedge, and two elastomers and the inside of the ShockStop stem becomes a bit more complex than its outer appearance would lead you to believe that it is. 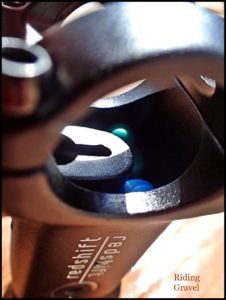 While the outer appearance of the ShockStop stem may seem simple, there is a lot going on inside of it.

Because of the simple outer appearance, the stem has a sleek aesthetic appeal and doesn’t look odd, nor does it draw attention to itself. The one thing it does have is weight. All the bits and pieces inside this simple looking stem add up to a weight of 255 grams on my scale for a 90mm extension version. These stems come in a size range of 90, 100, 110, and 120mm and have a +6°/-6° rise/drop depending upon how you orient the stem on a steer tube. There also is another version available with a 30° rise. Steer tube size must be 1 1/8th inch and the handle bar clamp size is 31.8mm, although shims will allow the use of 26.0mm and 25.4mm bars. The retail cost of the stem is $139.99.

One more thing to note- While you can orient the stem in a negative or positive rise, due to the way the design works internally, you may have to remove the wedge, wedge bolt, and elastomers to orient them in the correct way for the stem to work as intended.

First Impressions: Out of the box I was impressed with how simple this design looks compared to the alien looking contraptions we used on our mountain bikes in days gone by. This stem looks normal. I was also impressed with the weight. You will not mistake this for a lightweight component, but it isn’t a ridiculous amount of weight. The elastomers as supplied in the stem were what I went with just to see if a lighter than recommended setting would be good with gravel road riding. I will get into the guts of this stem later to see about the effects on ride characteristics when changing elastomers. 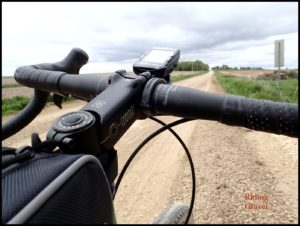 Unless you know what you are looking for, the Redshift ShockStop stem is rather subtle and unnoticeable on the bike.

The mounting of this stem is straight forward. Once you decide upon you orientation- negative or positive rise- you simply install it as you would any other typical stem. Once I had the ShockStop mounted, I gave the bars a heavy push downward, and I was surprised at how stiff the stem felt. However; once I started doing some shorter, “getting acquainted” rides, I could tell something was going on here.

I did get to do a ride or two on gravel roads around the area as well. My initial feelings are that this stem does a good job of dealing with a lot of the vibrations in the upper registers as far as frequencies go. Think “road buzz”, or the like. In fact, on pavement I almost cannot feel the front tire at all through the handle bar. Once I hit some smoother, less rocky gravel, the chatter that would have been there was greatly muted. It wasn’t gone, but I could see that my hands and arms were shaking far less than they would normally. Rough patches of gravel where the crushed rock was deeper had me feeling the rocks for sure, but again, to a lesser degree.

Okay, so it absorbs vibrations, but does it feel weird? Does the ShockStop stem affect your riding? In a word- No. I couldn’t feel the stem moving, but it was obviously doing a job that resulted in my feeling less vibrations. Actually I forgot about trying to detect if the stem was moving at all since it was so invisible in that regard. Perhaps a lighter set of elastomers would provide a more noticeable sensation of movement. By the way, I also accounted for tires being a part of this by using a slightly higher pressure than I typically would have. So, if anything, the tires were transmitting more vibrations than I am used to. 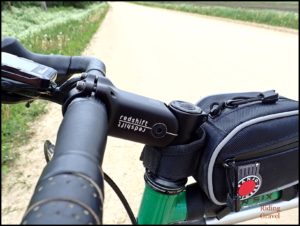 So Far…… The Redshift Sports ShockStop stem is a sleek looking, almost normal appearing stem that has a hidden talent for absorbing vibrations. It isn’t light, for a stem, but as a vibration taming device, it is one of the lightest options out there. There is a bit of technical futzing that goes in to finding the correct elastomers and orientation of this stem, but the results seem to be worth it. Gravel road chatter is greatly reduced and the stem’s operation is, so far, invisible while riding. Stay tuned for my update coming in a few weeks.

NOTE: Redshift Sports sent over the ShockStop stem at no charge for test and review. We are not being paid nor bribed for this review and we strive to give our honest thoughts and opinions throughout.