You are here: Home > Lauf True Grit: At the Finish
By MG on November 7, 2018 in Gravel Bikes, Reviews, Wheels

Lauf True Grit: At The Finish – by MG

As the cycling industry increasingly looks at gravel cycling as the ‘Next Big Thing’ in the marketplace, the resulting influx of money and resources has produced some incredible new bikes and gear. Case in point is the Lauf True Grit we’ve been testing since May. The True Grit employs a unique design and unique-to-Lauf technology to deliver a ride that defies simple description, but results in one of the most versatile, refined gravel rides available today.

For perspective, be sure to check out the earlier Getting Rolling and Checkpoint posts for the True Grit. 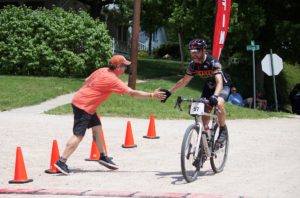 MG finishing the Solstice 100 on the True Grit. It was a great choice for the steep hills, fast descents and frequent washboards on the course. (Need photo credit)

As the presenting sponsor of the PCL’s Gravel Worlds, Lauf bikes were a common sight at the late-August event. Gudberg Bjornsson, chief design officer at Lauf, even flew into Lincoln from Reykjavik, Iceland to compete in the race. Impressive. What was even more impressive was how fast he rode after the long journey, and his straightforward, easy going demeanor was a pleasure to be around over the weekend.

Composure = Confidence on the Road

In many ways, the performance of the True Grit is consistent with with the demeanor of its designer – straightforward, unpretentious and easy going. But make no mistake, when the hammer drops, it’s ready to deliver the goods if you are. 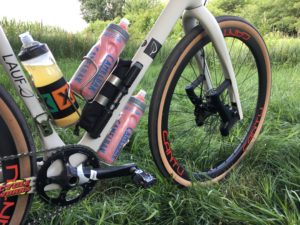 With three sets of bottle bosses, plus mounts on the top tube for a feed bag, the True Grit is well-equipped for a wide range of gravel riding. One suggestion for future models would be three pack mounts on the fork blades, which would significantly increase cargo carrying capacity.

The True Grit’s composed, calm feel makes it easy to go fast, particularly on shifty or rough gravel, or unmaintained B roads.

The Grit SL suspension fork goes largely unnoticed until it’s called into action by bumps. While we could feel a subdued bounce when we’d get out of the saddle and put most of our weight over the bars on a paved road, it was never a distraction on the gravel climbs the True Grit was built for.

When riding, it’s easy to feel that the True Grit frame and Grit SL fork are designed to function as a unit as well. It’s perhaps the first suspension-equipped gravel bike to be designed this way, and the resulting ride quality is as unique as the bike itself. 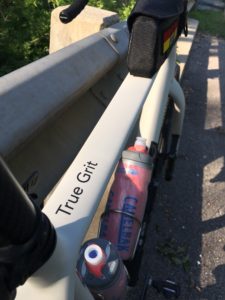 It’s been a lot of fun testing Lauf’s True Grit, and bottom line, it’s one of the best gravel bikes I’ve ridden to date. The True Grit proves that there isn’t yet a “formula” to building a great gravel road bicycle. It might not look conventional, but the resulting ride is compelling. It’s fast yet forgiving… A great race bike that virtually anyone can ride with confidence.

I have to admit: I almost cried when I boxed the bike up and shipped it back to Lauf. It really is that good.

Note: Lauf sent over the True Grit for test and review at no charge to Riding Gravel. We are not being paid nor bribed for this review and we strive to give our honest thoughts and opinions throughout.

7 Responses to Lauf True Grit: At the Finish