Back in June, I introduced you to the Lauf True Grit gravel bike I’ve been testing (read the Getting Rolling post here). Since then, I’ve logged nearly 1,000 miles on the bike on all sorts of Midwestern gravel, and the experience has given me good perspective on the True Grit’s capabilities. Here’s what I’ve learned. 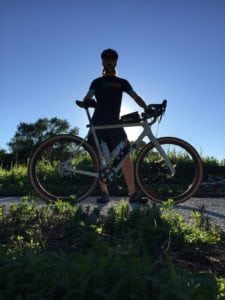 Hero shot… The True Grit is one of those rare bikes that looks even better when it’s dirty. (Photo: J. Petersen)

It’s been a long time since I’ve had so many people ask me about the bike I was riding. The True Grit is just that striking, even in a relatively subdued off-white (I call it limestone) tone of the bike we’re testing. In fact, I still catch myself staring deeply at the frame’s lines.

When painted in neon green, orange or any of the other custom colors Lauf offers (for an extra charge), the bike’s visual appeal is off the chart. Long story short: don’t buy this bike if you’re trying to keep a low profile. It’s a conversation piece as much is it is a performance machine.

On the road, the True Grit doesn’t disappoint in any situation. That said, it clearly has a preference for going fast, so if you like an upright position, this isn’t the bike for you. The long reach and low stack put you into a great position to hammer, and the stiff carbon fiber frame puts every watt of power you generate directly into the rear wheel. 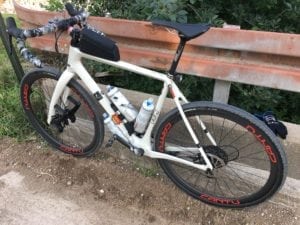 The True Grit has a long, low front end, perfect for folks that like an aggressive position. MG had to run a 25-degree rise, 75mm length stem to dial the fit in for his preferences. Taking time to set the True Grit up right is worth the effort.

The frame geometry reinforces this preference for speed. In fact, at lower speeds, the front end can feel a little floppy at times. Once the speed picks up however, the handling of the True Grit springs to life.

That said, the Lauf doesn’t steer itself. It demands your involvement. You have to tell it what to do, in much the same way you have to do with a modern trail bike. Once you adjust to its mellow demeanor, the True Grit is an incredibly capable handler. Overall, the geometry makes the True Grit a predictable, stable ride in every gravel condition encountered to date. 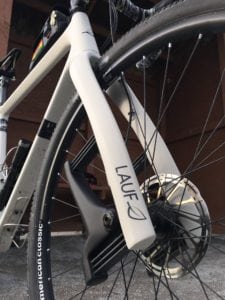 Showstopper… With 30mm of travel and the ability to quickly respond to bumps, the Grit SL fork is a huge asset on the road.

Lauf’s unique Grit SL suspension fork has just 30mm of travel, but I’ve found it to be a great asset on pretty much any ride. Compared to the Fox AX fork on the Otso Waheela S Guitar Ted recently tested, the Grit SL’s lack of hydraulic damping and stiction-free action makes it much more competent at absorbing the washboard and stutter bumps so common on gravel roads here in the Midwest. Not only that, but the sub-1000g weight of the Grit SL is more than a pound lighter than the AX. I’m sold.

At the outset of the test, I wondered if the ride quality of the rigid frame would seem unbalanced with the Grit SL suspension fork up front. Fortunately, my fears were unfounded. While the rear of the bike clearly doesn’t have suspension, it’s certainly not harsh.

I’ve ridden the True Grit with the stock seatpost, and also with the Kinekt isolation post from Cirrus Cycles I’m currently wrapping testing up on. While the Kinekt post does indeed offer a smoother ride than the stock rigid post, I’ve found that I like the bike just as much with the lighter rigid post, and that’s impressive. 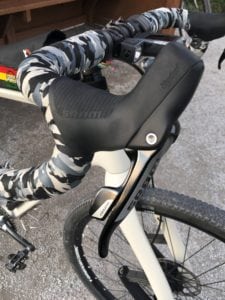 The SRAM Rival 1 disc group included with the ‘Weekend Warrior’ build worked well and keeps MSRP to just $3,690. That’s a lot of performance for the dollar.

Overall, the components Lauf specs on its ‘Weekend Warrior’ build are serviceable, particularly given the sub $4,000 MSRP for the complete bike.

The SRAM Rival 1×11 group shifts and brakes well, for the most part. Shifts to smaller/harder cogs are a little crunchier than with a Shimano drivetrain, but it gets the job done without too much fuss. The Rival hydraulic disc brakes have been smooth, consistent and powerful throughout the review. They do tend to squeal under light trailing braking, but the noise quiets down quickly as braking forces increase.

I had two issues with the stock build, however. First, the stock midrange American Classic wheels are simply too heavy to let the bike’s true greatness shine through. Second, the size large True Grit I tested came with 172.5mm cranks.

While just 2.5mm shorter than the 175mm cranks I’ve ridden my entire life, I wasn’t able to fully enjoy the True Grit with the stock cranks. Fortunately, I was able to swap in a set of 175mm SRAM Force cranks from the parts bin and all was better. For riders of small or medium Lauf frames, the shorter cranks likely won’t be as much of a problem, but for my 34-inch inseam they’re simply too short. 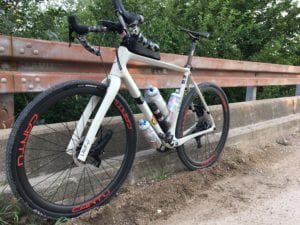 The Cantu Rova gravel wheelset unleashed the potential of the True Grit frameset. It shed more than a pound of weight in the best place to save weight on the bike – the wheels. Of all the parts I changed on our test True Grit, the Cantu wheels were by far the best upgrade I made.

The Cantu Rova wheelset I’m testing for Riding Gravel slashed about one pound of rotating weight from the True Grit, and this truly woke up the acceleration and handling of the bike. There are few upgrades that can have as profound of an impact on the performance of your bike as wheels, so while $1,595 is a lot to spend on wheels, their performance on the road is well worth the investment for seasoned cyclists.

Lauf has a winner on its hands, no question. I’ve ridden a lot of gravel bikes over the past dozen years, and the True Grit ranks as among the absolute best I’ve ridden. The only downside is if you simply don’t fit on the three sizes Lauf currently offers. If there was anything I’d recommend they do, it’s to broaden its size range.

You can check out my Getting Rolling post for the Cantu wheels here, and I’ll talk more about their performance and value in my upcoming Checkpoint post for the wheelset. Look for that to come soon.