As gravel and adventure cycling grow in popularity, we’re seeing more and more products designed to filter out bumps and vibration before they reach the rider. The ShockStop suspension stem from Redshift Sports is one such new product.

The ShockStop is a fresh take on the “suspend the rider, not the bike” concept popularized by Allsop/Softride in the 1990s, but thankfully, that’s where the similarities end. But that said, I was around back then, so I approached this test with a bit of trepidation.

As it turns out, my fears were unwarranted. I’ve been riding a ShockStop stem for the past few months in a wide variety of conditions and am ready to report on my experience.

Earlier this year, Guitar Ted did a comprehensive review of the ShockStop, and overall came away impressed with its performance. Check out his reports: Getting Rolling; Checkpoint; At The Finish.

Unboxing the ShockStop, it’s not immediately noticeable that there’s 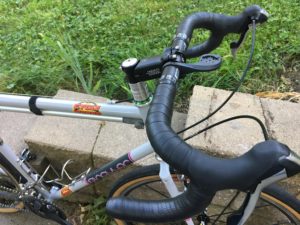 Initial installation was straightforward and the ShockStop doesn’t call attention to itself, even on a slim-tubed steel bike.

anything special going on relative to a traditional stem. Holding the stem in my hand, it didn’t feel particularly light, but it’s also not bad considering it’s hiding a couple elastomers, a pivot, bearings and hardware inside.

In my haste to mount the ShockStop up, I forgot to weigh it. That said, since Guitar Ted and I both tested 90mm versions, I have to assume mine weighed in at a similar weight to his, or 255 grams (on his scale).

Considering a Thomson X4 stem weighs 154 grams (mfg. claimed) in a similar size, you’ll likely add 50-100 grams to your bike with a switch to a ShockStop. Weight weenies won’t like this, but for those of us who know what it’s like to ride several hundred miles in a day, it’s not a huge weight penalty for the benefit it provides.

The ShockStop is suspended by elastomers hidden inside the stem extension. They’re easily-swappable by removing the handlebar faceplate and unscrewing a small retaining screw. Five different densities of elastomers are included, and the included instructions give a good, (and from my experience) accurate reference as to which elastomers should be used with flat or drop bars, for riders of various weights. 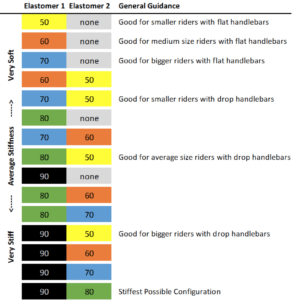 A chart from Redshift Sports detailing the elastomer options, from softest to stiffest. This works with a second weight range chart to help you dial-in the ShockStop to your weight.

As I unboxed the ShockStop, the stem had a feel of quality in my hand. The quality of the black finish was very nice and the fasteners had a solid, if a bit industrial, look to them. Overall, I was impressed.

Initial installation was straightforward, similar to a typical stem with a four-bolt faceplate. That said, it’s important to follow the installation instructions to the word, particularly if you’re swapping out elastomers. An example is the bolt that secures the elastomers. It is small and requires very little torque. As a result, it’s an easy bolt to over tighten and inadvertently damage. Follow the instructions and you’ll be just fine. 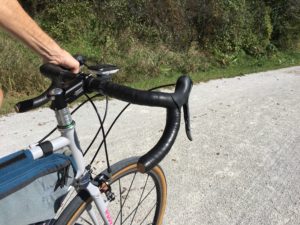 On the bike, the ShockStop looks like a normal stem, but when riding it’s easy to feel there’s something special hidden inside.

My first ride on the ShockStop was a local loop I’m familiar with. I could immediately tell it was working hard… Perhaps too hard. Upon return to the shop after my first ride on the ShockStop, I decided to install one step stiffer elastomers than stock. With the stock setup, it felt like my static position was sagged too far into the stem’s travel. The stiffer elastomers effectively reduced the static sag in the stem, which reduced the sensation of movement while preserving the ability to absorb bumps and vibration.

Once I made the elastomer change, I was good to go with the performance of the ShockStop stem. It required no maintenance and felt just as stiff side-to-side as a traditional stem. Clearly Redshift Sports has done its homework on the pivot design. Impressive… 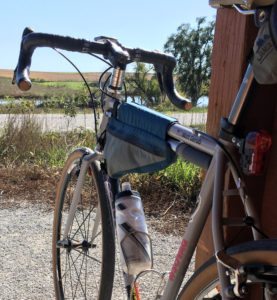 Components of a great ride… The ShockStop stem is one of the best new products MG tried in 2017.

One question I had was how it’d perform in colder, sub-freezing temperatures. Back in the 1990s, when elastomers were used in suspension forks, they earned a horrible reputation for cold weather performance, so I was curious to see how these new elastomers would fare.

Much to my surprise, the ShockStop continued to perform well, even on rides in the mid 20-degree (F) range. There may have been a slight stiffening on the really cold rides, but overall it was much better than I’d expected coming into the test.

I’ve used the ShockStop stem on rides ranging from 25 to 150 miles and it’s been totally reliable. In fact, the stem is still installed on my go-to Singular Kite gravel rig and I have no intentions of taking it off. It’s effective on its own at reducing bumps and vibration. That said, I feel the ShockStop is potentially even more effective when you use it in tandem with vibration-reducing technology in your seatpost and/or saddle.

In testing the ShockStop, I tried it with three seatposts: a rigid alloy Thomson; a Niner RDO carbon post (designed to flex more than traditional posts); and the BodyFloat suspension post from Cirrus Cycles (which I tested on RidingGravel.com in 2016). While the ShockStop worked well with the Thomson post, it worked even better with the Niner RDO post. It felt like the compliance from front-to-rear was balanced, with a similar overall ‘feel’.

I liked the ShockStop with the BodyFloat post as well. It was definitely smoother and more balanced front-to-back than the BodyFloat with a traditional stem, but it lacked the homogeneity of the ShockStop/RDO combination. As a result, moving forward, I’m going to try to keep the two components together, even when running on different bikes.

Bottom line: the ShockStop stem does what Redshift Sports says it’s supposed to do. And while it’s heavier than a traditional stem, the weight difference is hardly objectionable considering the stem’s performance at reducing bumps and vibration felt through the hands. The combination of ‘normal’ looks and unique performance are compelling to me, and the $139.99 price seems very fair. Well done, Redshift Sports.

NOTE: Redshift Sports sent over the ShockStop stem at no charge for test and review. We are not being paid nor bribed for this review and we strive to give our honest thoughts and opinions throughout.