A decade ago when the gravel cycling scene saw its rise to popularity begin, there were very few choices in handlebars with flare and sweep. Flare and sweep, you say? Yes. That is what makes an off road oriented drop bar design different than a traditional road design.

If you stop to think about a traditional road bar, the “hook” part is perpendicular to the “top” which is the cross bar between the hooks. On a flared drop bar, those hooks are slanted outward at the bottom. With “sweep” added in, the extensions of the hooks back toward the rider are splayed outward as the rider looks down at them. This is all done to give the wrists and forearms more clearance for off road maneuvers when a rider is in the drops. Gravel road riders gravitated to these wider, flared, and swept bars due to the greater control these bars give a rider over loose, rough surfaces.

Now with the ever increasing influence of gravel riding on the cycling world we’ve seen many handlebars introduced with flare and sweep. Handlebars meant for gravel riding or the ubiquitous “adventure bike” genre which use drop bars. One of the newer entries to the fold is the Ritchey Design VentureMax.

Technical Specs: The Venture Max is a triple butted, 7050 alloy bar with 76mm of reach and 102mm drop. For comparisons sake, this is similar to a Salsa Cycles Cowchipper bar. The reach is a tad bit longer here. The flare is 24° and the sweep at the extensions is a 6° figure, which is barely noticeable. The clamp diameter is 31.8mm and here is what Ritchey’s site has to say about the bar:

It’s all in the name – Ritchey’s newest addition to their rich handlebar lineup is made for adventure. The VentureMax is just as applicable on a cross country tour as on cross country singletrack. Intended to ride wider than typical drop bars, the VentureMax is measured at the initial bend rather than at the hood. While it boasts a number of attributes including multiple hand positions, it’s the return of the Bio-bend in the drop that adds to the signature look and feel of this bar. 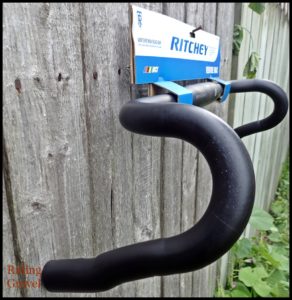 The “Bio-bend” was very different from what I am used to here.

The VentureMax comes in five widths: 38cm, 40cm, 42cm, 44cm, and 46cm. The test sample sent was the 46cm width and compares well with what I am familiar with for 46cm off road type drop bars. Weight? Well, I was too eager to mount these samples up, so I did not get a weight, but they are light enough. Definitely in the ball park for this type of bar. Also, the bars will accept bar end shifters.

The bar was installed on my Raleigh Tamland Two with the recently tested Gevenalle HYDRAULIC levers and shifters. The VentureMax bars were then wrapped in Salsa Cycles blue tape and the set up was tested on local gravel roads I am very familiar with and on the course of Gravel Worlds which is around Lincoln Nebraska. With well over two hundred miles on the bars over different types of gravel roads and dirt roads, I can safely say that I have gotten to know them quite well.

Ride Impressions: The experiences I have had with “ergo” bends in drop bars have varied but mostly they have been on the negative side. The bends put in many bars seem to be in the wrong places, (for me), and many times they were actually dictating where your hands must be instead of allowing you to position them incrementally wherever you want to. Now, I admit, I am a person that cannot do the same dance step more than three times, so your mileage may vary here. 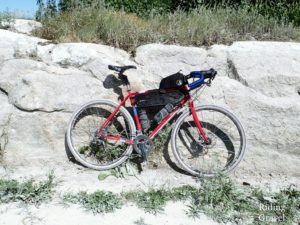 The Venture Max bars mounted to the Raleigh Tamland

So, as you might guess, the Bio-bend thing was looked upon with great skepticism by me at the onset. However; I found that I didn’t mind the bend, and after a test ride or two in which I adjusted the tilt of the bar slightly, I found a satisfying setting. Subsequently I decided to use the bars at Gravel Worlds, which is a 150 mile gig. No small ride! I was that confident they would be agreeable with me.

I found the bars not only to be agreeable, but with the triple butted aluminum construction, they had enough give that bumps and jarring were muted more than it might have been with a stiffer bar. That said, more important was the fit and feel over the eleven plus hours I rode the bars the day of Gravel Worlds. These bars fit into my hands well and the Bio-bend bit never impeded my comfort or hand placement choices to a degree that was bothersome. The Bio-bend does take a bit of getting used to; however, and getting the angle of the drop section correct for your ergonomics is critical. When I first tried the bars, the Bio-bend thing was a bit annoying. As stated above, after  tweaking the angle of the drops a bit, and as a side effect, moving the levers as well, the Bio-bend suddenly made more sense to me. 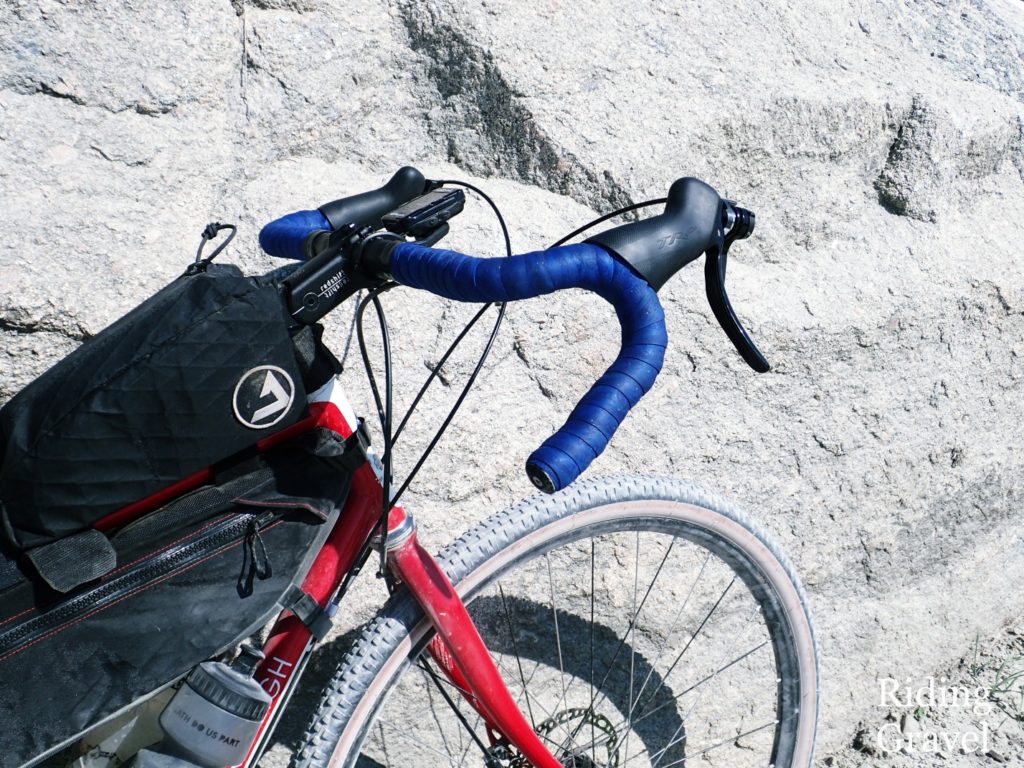 The Bio-bend bit on the extensions requires a careful angle adjustment to really come into its own.

At The Finish: With a generous amount of flare and a not too radical amount of sweep, the VentureMax bar strikes a great balance between comfort and useful hand positions. Kudos to Ritchey Designs product engineers for getting the drop’s radius correct so the tops, levers, and drop extensions are all usable positions. Unlike a few off road drop bars which have either too open a radius, too severe a constant varying radius, or are featuring too deep a drop, all things which impede the rider’s choices for set up. The VentureMax does require a bit of fine tuning to bring the Bio-bend part into focus for the best ergonomics, but the results are well worth the effort.

The results of my testing were that this bar, once tweaked to my satisfaction, was definitely a winner in promoting good handling, providing comfort, and the overall aesthetic is not displeasing. They do look a bit odd, with that funky kink, but I’m saying it gives the VentureMax some character. Your eyes may judge differently there. At $94.95USD these are a bit spendy compared to some other bars, but the design is everything with these flared off road drop bars and Ritchey nailed this VentureMax’s design. It is very well done, comfortable, and with Ritchey’s reputation in handlebars, a good choice for rough roads and gravel travel.

NOTE: Ritchey Design sent over the VentureMax bar at no charge to RidingGravel.com for test and review. We are not being paid nor bribed for this review and we strive to give our honest thoughts and opinions throughout.