Wheels are often said to be the most important and effective upgrade you can make to your bicycle. That is something we are going to explore in the coming weeks. For now we are privileged to be checking out not only some nice wheels from Industry Nine, but some wheels that bring something a bit different to the table. That would be their anodized look, which is anywhere from subtle to outlandish, depending upon your preferences. Not only that, but these are the new Ultralite 235 CX TRA wheels which are being marketed towards the gravel rider. 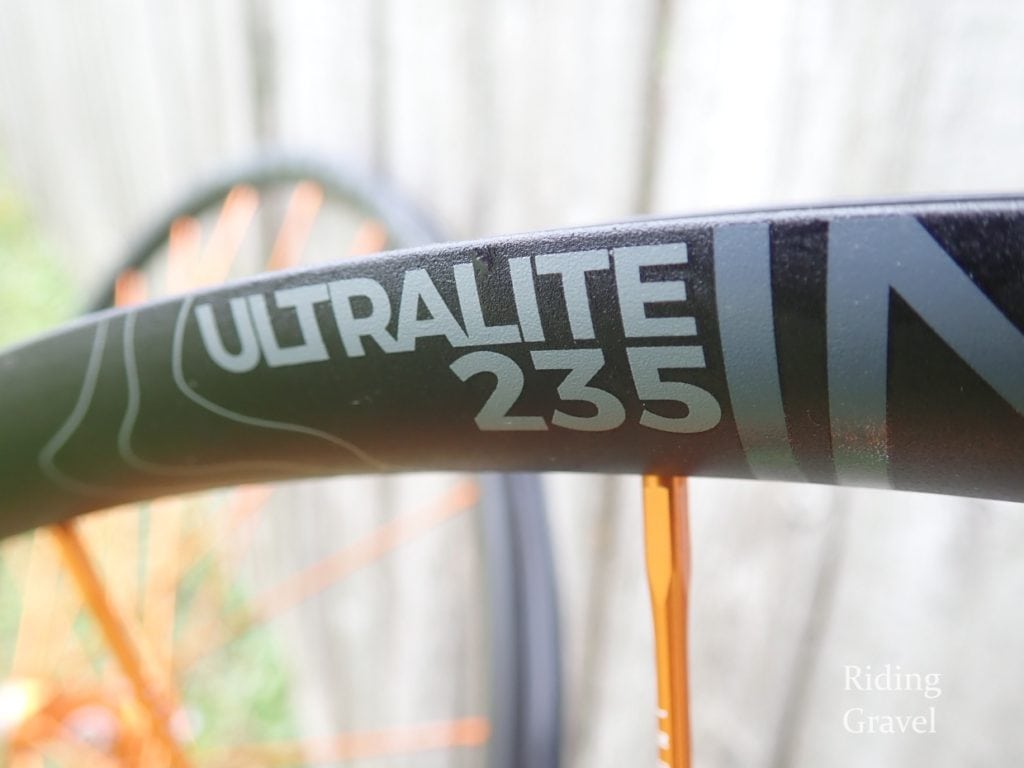 The Industry Nine Ultralite 235 CX TRA wheel set is representative of the characteristics that put I-9 on the map well over a decade ago.

What It Is: The Ultralite 235 CX TRA wheels are built on a similar “chassis” design as Industry Nine’s mountain bike wheels. The Torch Road wheels, which feature traditional straight pull spokes and a low spoke count design, have been popular with gravel riders but Industry Nine was receiving requests to have more gravel oriented wheels built, with wider rims, using the aluminum anodized spokes and hubs Industry Nine has used on its mountain bike line for well over a decade. So, a new platform was developed, (Industry Nine likes to call it a “chassis”), and the anodized bling was brought to bear on a wheel set that isn’t as burly as I-9’s typical mtb wheels but has the moxy to deal with anything gravelly. 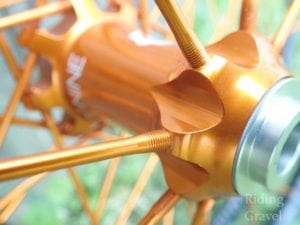 The sculpted hubs and straight pull, aluminum spokes are hallmarks of I-9’s wheels.

Our test set represents a level of customization to the Ultralite 235 CX TRA model called “Level 2” in which you can spec certain colors for the hubs and spokes. There are “Base” level wheels which are all black ano, and then there are three levels of customization available which are “Level 1”, “Level 2″and “Level 3”. Base wheel sets are priced at $1225.00USD. Level One wheels are the first level which allows a few choices in colors for a few spokes in the wheel. The other levels add more to that if you choose to go with more anodized hues. You can play around with different designs using I-9’s “Ano-Lab” here.

The new Ultralite 235 CX TRA wheels also come in all the configurations for axles that are currently in vogue for road bikes and all road/gravel bikes. Our set came set up for the 12mm front and 12mm X 142mm rear through axle standards. These wheels are also tubeless, of course, and they come out of the box with Industry Nine valve stems and the rims are pre-taped for tubeless use. Every wheel set comes pre-taped with valves installed, and also has two extra  spokes, a set of three pawl springs, and a spare “O” ring for the drive side rear end cap in the box the wheels are shipped in to you.

The level of detail is fine. Every spoke is laser etched with the company’s name.

The anodization on the Ultralite 235 CX TRA is stunning. The color is rich and even across all the components and from wheel to wheel. No small feat. Anodization processes are difficult to keep consistent. Industry Nine seems to have this figured out. The spokes and hubs interface with each other in a threaded manner which allows the wheels to be trued in a traditional manner. A spoke wrench can be used at the point where Industry Nine machines in  wrench flats on the spokes near the rim. The spokes terminate inside the rim well by means of a large “nail head”, so the spoke can turn when force is applied at the wrench flats. This makes truing a wheel, if necessary, not such a big deal as you might think it to be at first glance. 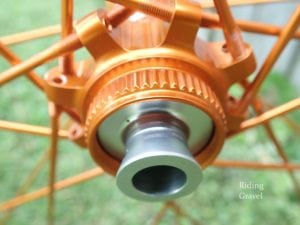 The entire wheel is aluminum. All machine work and anodizing are done in house by Industry Nine in their Asheville, North Carolina facility. The most notable characteristic beyond that rich colored anodization is how Industry Nine has made their free hub body mechanism. Featuring a 60pt, 6° engagement, the hubs can be had in all currently available standards for cassettes. Our test sample came with the Shimano style cassette interface for 11 speed road. That “buzz” the free hub makes when coasting is unmistakable and you know immediately what kind of hub this is, if you are familiar with Industry Nine. Yes, it is loud! The brake mounting standard for all Ultralite 235 CX TRA wheels is the Centerlock type. Don’t have Centerlock rotors? There are several adapters on the market to convert to six bolt style mounts.

The test set we received weighed in at a svelte 1450 grams which is even more impressive when you consider that was including valve stems and tubeless tape. The rims measure at 23.5mm inner width/27mm outer width. These are rated for tires in the 33mm-55mm width range. MSRP for our Level 2 build is $1385.00USD.

First Impressions: Wow! These are stunning wheels to look at. If you are like me, and have a fondness for different colors of anodized aluminum bits for bicycles, you might be in heaven while looking at these wheels. This isn’t for everyone, so perhaps the “Base” Level wheel with all black, all the time, might be more your speed. That said, these wheels impresses in the looks department. 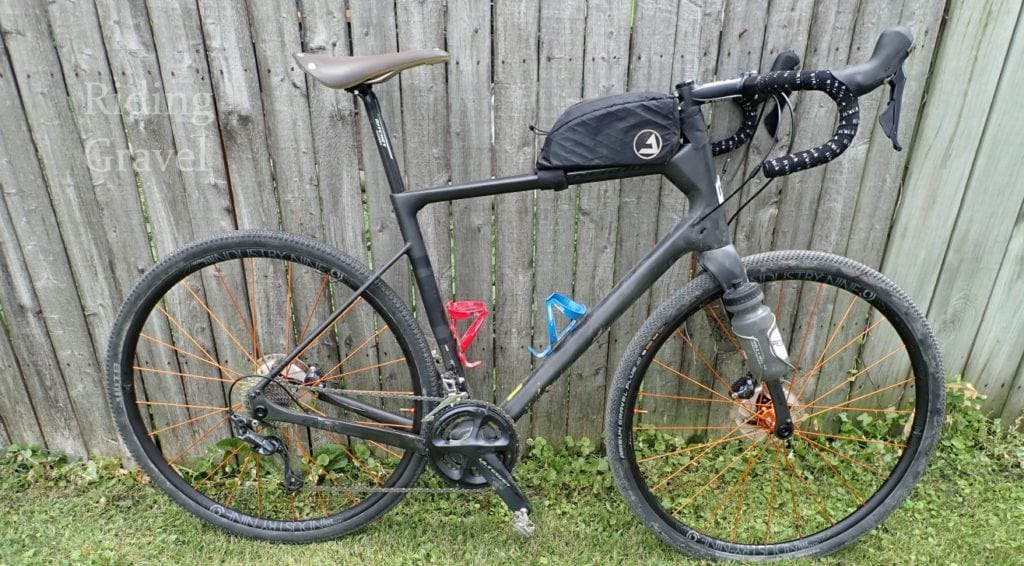 The Ultralite 235 CX TRA wheels mounted to the Jamis Renegade Elite we have on test.

The wheels were mounted with a WTB Riddler 37mm tire for the rear wheel and a 40mm Arisun Gravel Plus for the front. Both tires mounted up perfectly with the Riddler being a tougher to mount tire necessitating steel core, plastic tire levers to get the tire over the Ultralite 235 rims. That Riddler was a used tire also, which leads me to believe a new Riddler might have been a “no-go” fit. Something to keep in mind here. The cassette and rotors mounted easily and as I expected. The through axles fit the wheels fine, and there was no brake caliper fiddling necessary after the wheels were on the Jamis Renegade Elite we have on test.

So Far…. These are stunningly beautiful works of machining and anodization. The good news so far is that they seem to also perform as well as they look. Initial test rides show that the wheels seem to be stiff enough and act normally. I will be riding this bike in Nebraska for a 100 mile event, barring any calamities, so hopefully I’ll have a pretty good read on them after that. But for now I will say that they act like they should, have a reasonably quick engagement feel, and have done very well as tubeless wheels. Stay tuned for the “Checkpoint” post coming soon.