You are here: Home > Fresh Gravel: Arisun Gravel Plus 40 Tires
By Guitar Ted on May 22, 2016 in Components, Gravel News, Reviews, Tires

RidingGravel.com has just taken delivery of an air-freighted set of some new tires for gravel riding from a brand you may never have heard of before. The brand and the tires are set to make their US debut soon near a back road near you, so let’s get to know Arisun and their new tire model called the Arisun Gravel Plus. 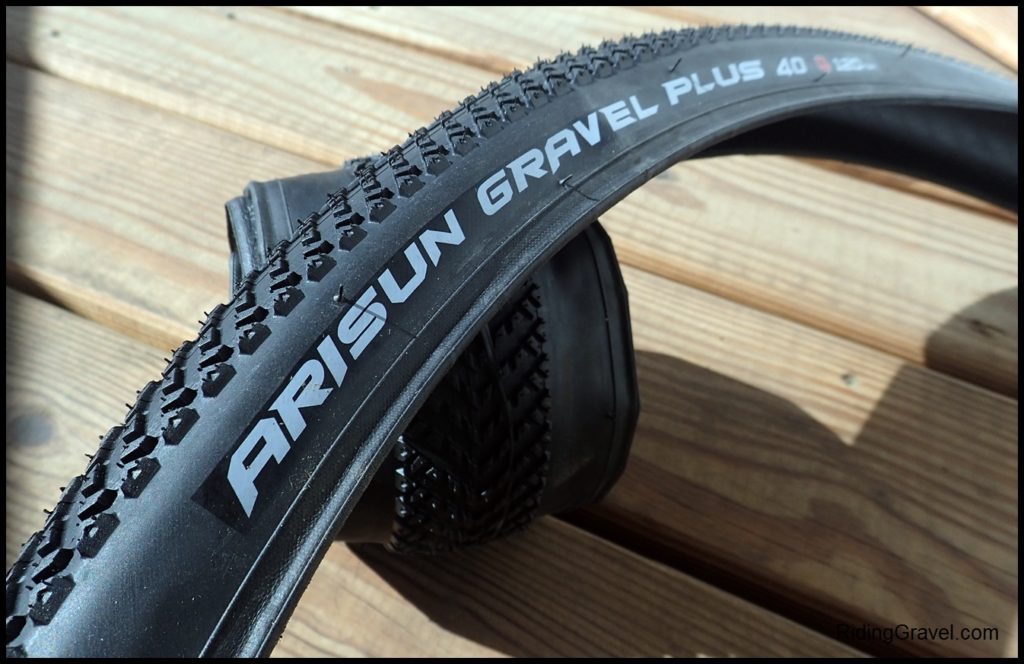 Arisun? That’s right, Arisun. The name that you will see soon on a line up of premium quality tires including plus sized mountain bike, road, and even studded Winter tires. The parent company is ZC Rubber, and they are the largest tire manufacturer in China. I was told that this company pumps out well in excess of 200,000 bicycle tires each day. This includes loads of tires for a lot of brands you’ve heard about, and probably have used. Now ZC Rubber wants to strike out into the US market under the name Arisun in much the same way Cheng Shin Rubber did with Maxxis. 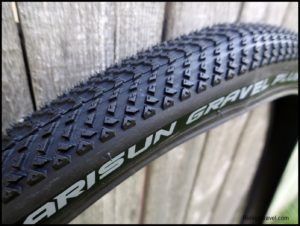 The Arisun Gravel Plus has a pronounced chevron block pattern tread.

Okay, so that’s a brief back ground on the company. What about this tire? The Gravel Plus is a claimed 40mm wide tire featuring 120TPI casing, , (Editor’s Note: Arisun later told us that these tires did not, in fact, have a tubeless ready bead), and dual compound tread with what feels like a flat protection belt under the tread area. These tires were air freighted to us from the preproduction samples and we do not have final specs or pricing on them as yet. We were told to expect the Gravel Plus tires to arrive for sale in the U.S. around late June/early July. Pricing has yet to be determined as well.

The tires resemble the Maxxis Rambler 40’s we tested recently in that the tread pattern is a low, blockish type of tread with a distinct chevron pattern for the Gravel Plus. These will be set up tubeless and we will start out with our first ride impressions beginning with our follow up post on these. Expect that in a couple of weeks.

Right now we can share the weights and those came out at 480/470 grams for the pair. This compares with other tires in this class as follows: The lightest tires we’ve tested were the 370/380 gram Maxxis Ramblers. We measured 440 grams for the 36mm Clement MSO’s that we tested. The Teravail Cannonball tires, a 40mm tire as well, weigh in at 500 grams as tested by us earlier. Note: Since we learned of the mistake in information provided to us concerning the tires’ bead type, we now are of the opinion that these folding bead tires are on the heavy side.

NOTE: Arisun sent over the Gravel Plus tires at no charge to RidingGravel.com for test and review. We are not being paid, nor bribed, for this review. We will strive to give our honest thoughts and opinions throughout.