You are here: Home > Enve G23 Wheels: Getting Rolling
By Guitar Ted on November 8, 2018 in Components, Reviews, Wheels

Wheels are awesome. When it comes to bicycle wheels, carbon fiber makes wheels more awesome. I accept that now, although there was a time when I didn’t think that carbon was a good idea for a bicycle rim. There were several reasons for that. They often were dead feeling, too stiff, and sometimes the rims were actually heavier than their aluminum counterparts. Add in the price you had to pay to get carbon rims and it just didn’t seem like a good idea. We won’t even get into the rim brake thing. Then along came Edge Composites. That was what Enve used to be called. They had a new way of doing things and they promised that it made a big difference.

They were right. Their rims were fantastically light. They were very stiff, and since these were mountain bike rims, the rims were disc brake specific. The guys at Edge/Enve told me they were fantastically tough. I actually was able to lace a set up and test them for my old gig at a site called Twenty Nine Inches. They tested out pretty well, for 2008, and I’ll spoil the story a bit- those wheels are still being ridden today. Hold that thought. That is something I’ll get back to later in this review.

Okay, so let’s get back to the point here. RidingGravel.com has a set of Enve’s latest wheels and these are meant for gravel travel. They are called the G23. Let’s take a closer look at these high end carbon offerings for gravel racing and riding. 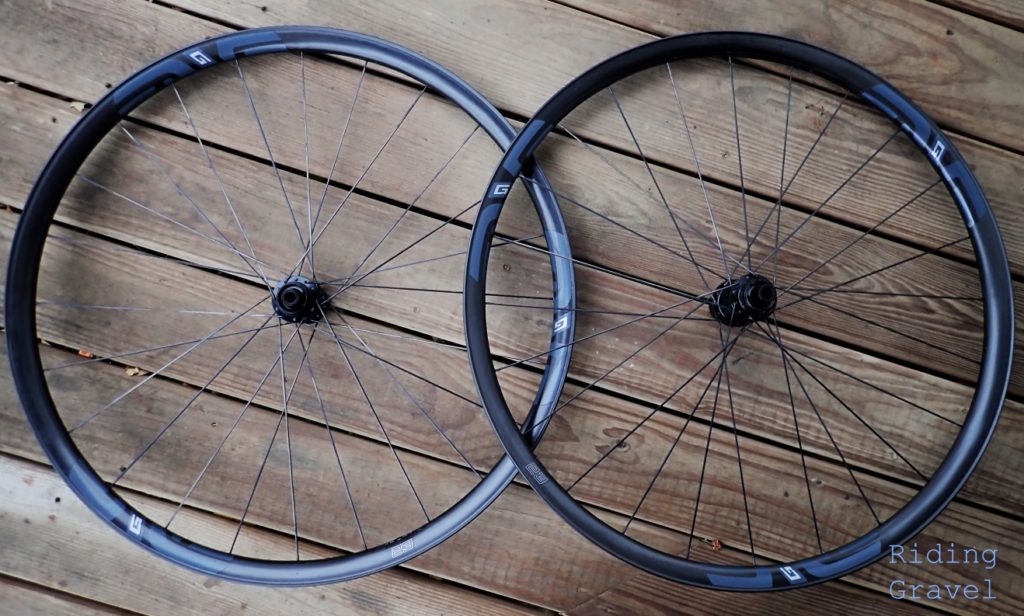 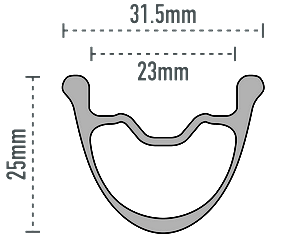 The G23 uses a bell like rim section shape to help reduce weight, absorb vibrations, and helps dampen the ride over the rough stuff.

What It Is: The Enve G23 wheels are purpose built from the ground up with the gravel/all road bike in mind. Here is what Enve has to say about this wheel set from their website:

The G23 is the definition of a true disc gravel wheelset.  At 330 grams, ENVE’s lightest 700c tubeless rim accelerates quickly and ascends with ease. Armed against pinch flats with the patent pending Wide Hookless Bead, the G23 is tough and relentless on road, path or trail. The G23 is a 700c tubeless carbon clincher wheel set, with a generous 23mm internal width, specifically conceived to meet the performance and ride quality demands of serious mixed surface cyclists.

The G23 wheels also feature 24 Sapim CX-Ray spokes per wheel using Enve’s molded spoke hole technology along with their own proprietary spoke nipples. These nipples work with the molded spoke pocket like a little ball and socket joint to help disperse stress at this critical area.The wheels I built with Edge/Enve rims a decade ago used this same technology. It’s pretty well proven.

The G23 rims are also a “hookless design”. This means that the rim edge is no longer “L” shaped to retain a tire/tube combination and to make tires easier to install, as in days of old. Hookless designs came about as tubeless tire technology became more prevalent and advanced. Tires are retained, not by a rim bead hook, but by a molded in bead lock, or channel, which interfaces with tire beads upon installation. Furthermore, tires can now take on a fuller, more voluminous shape due to the lack of a bead hook. Enve also has widened and beefed up the rim edge to help ward off pinch flatting tires. So, all in all, losing the bead hook is a good thing, and nothing to fear. Oh, and if you still use tubes, this lack of a hook doesn’t hold you back either. 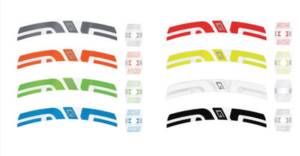 The G23 wheels can be customized with colored decals at a slight up charge.

Enve has developed the G23 rims to be tough, but also to ride well. The target was to make a fun wheel to ride on gravel and back roads. Part of that was making the lightest 700c rim Enve has on offer. In fact, it is the lightest clincher rim they have ever brought to market. Enve also did not just repurpose a road rim or a mountain rim as a gravel rim. This rim was designed from the ground up with gravel riding in mind. Part of making the rim fun to ride has to with the energy damping and vibration absorbing carbon layup. Obviously, if a rim cannot take the punishment, then none of the previous makes any difference. Enve borrowed technology from the M Series mountain bike rim line to make these wheels live up to their promises of fun riding. While the G23 rims are not as tough as those M Series rims, the G23 tested out as being tougher than the competition’s gravel rims and were tested to mountain standards and passed. So, while they may be very light wheels, they shouldn’t be fragile wheels.

Measurements and First Impressions: And just how light are these wheels? Pretty darn light. I saw that Enve claimed a weight of “less than 1300 grams per wheel set”. Okay…… To the “Scales of Truth” in my shop! I hung these from my digital scale and the final verdict was a wheel set that weighs in at 1290 grams for the pair. Yes, these are light! Of course, that was without anything like rim tape or tubeless valve stems installed, but even with those items on there the wheels weighed in at 1340 grams. That’s still pretty darn light. Especially for a purpose built gravel road wheel set. 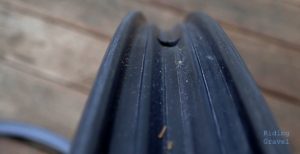 Attention to detail is obvious when you look closely at the Enve G23 rims. Note the molded in bead lock and deep center channel.

Of course, the rest of the pertinent measurements were given in the diagram above from Enve. The hubs on this wheel set are the venerable DT Swiss 240 series hubs with Center Lock rotor interfaces. No complaints there, however, Enve also will build up this model with Chris King R45 hubs if you’d rather go that route. The carbon rims are very well made. I noted the wider hookless rim edges and the well defined bead lock in the rims. One detail that might seem trivial until you mount tires is the center channel. This allows you to properly offset the tire when mounting or dismounting, making life way easier. My WTB Resolute tires went on by hand, yet I was able to pump them up with a Silca Pista Plus floor pump, (to be featured in a Quick Review soon), with no extra effort. Just easy-peasy. As it should be.

The wheels are understated and the branding is subtle, unless you opt for the optional colored decals, which can be applied at the factory by Enve for a slight up-charge. I like that they don’t “scream” at me and the workmanlike appearance is something I can appreciate. That isn’t to say I don’t like color, (See my Industry 9 wheel review), but I am not a fan of loud branding either.

Finally, it has to be said- these wheels are expensive! So let’s get this out of the way right up front. A set of G23 wheels will ding your bank account for $2800.00USD. That is significant, but, as I alluded to in the beginning of this post, you can look at this from another angle. When I laced up those old Edge rims, the guys told me that the MSRP on each rim was $800.00. I was aghast. Really?! They said, “Well, we look at these as a long term investment. We expect these to last a decade with regular use. How many other premium wheel sets would you buy in that time period?” Fair enough. I may not buy nearly three grand worth of wheels, but maybe I would. And if you don’t think these would last ten years, I know of a set of Edge wheels rolling around that are ten years old. Oh……and I also should point out that these rims are manufactured in Ogden, Utah, USA. That’s also going to bump the price up a bit.

So Far……. The G23 wheels are super light, understated looking, and packed with cutting edge carbon technology. Manufactured in the USA, they don’t come cheap, but they should outlast a few sets of aluminum rimmed wheel sets and with DT Swiss hubs, the ability to keep these going is there. We will see in our “Checkpoint” post how they do at making riding gravel more fun. Stay tuned.

NOTE:  Enve Composites sent over the G23 wheel set to RidingGravel.com at no charge for test and review. We were not paid nor bribed for this review and we strive to give our honest thoughts and opinions throughout.

One Response to Enve G23 Wheels: Getting Rolling