I have a bit of a nostalgic relationship with the Dirty Kanza 200. After watching a handful of friends participate in the first DK200 in 2006, I tried my hand in the second edition of the event in 2007. It was my first 200+ mile gravel race. And in the ten years since my first DK experience, the event has grown into what is likely the largest gravel event in the world, with roughly 2,000 participants this year. 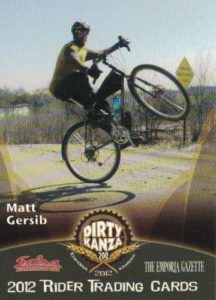 Memories… MG got his own Dirty Kanza trading card in 2012.

I was fortunate to finish the DK200 in 2007, and I’ve gone on to finish the event four more times since then, for a total of five finishes in six attempts (my 2015 DK200 attempt was cut short by a mud-related broken derailleur). Our growing family prevented me from racing in 2016, but this year I’m excited to have the opportunity to once again toe the line at the Dirty Kanza.

Preparing for the known… and the unknown

There’s a lot to consider when preparing for a long gravel event like the Dirty Kanza. Each event has a unique set of requirements, from gear to physical preparation. In an event such as the ‘Kanza, having completed it before gives me perspective to help me better dial-in my bike and gear for the challenge ahead. 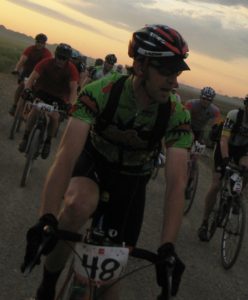 That said, weather is always an x-factor at the DK200, as it is in many gravel events. And to-date in 2017, mud has been a factor at virtually every major gravel event on the calendar. Since nothing can take your setup from totally dialed to barely usable as quickly as an unplanned shift in the weather, experienced gravel racers come prepared. For me, that means running tires that are proven to be usable in mud, significant frame/tire clearance and the option to run fenders, if needed.

The Singular Gryphon I’ll be riding at the DK200 is in its fourth season, so I’ve had plenty of time to dial in the components, fit and accommodations for varying road conditions. With 45c tires, it’s got plenty of clearance for mud and debris to pass through the fork and rear triangle. And I can quickly add lightweight fenders front and rear if the conditions warrant. 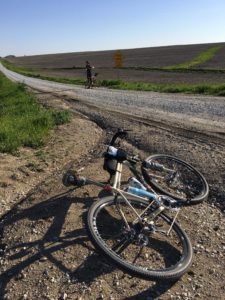 MG’s Singular Gryphon at rest during the 2017 PCL Tour of Dirt Roads.

No other bike I own fits me better than my Gryphon. Its stable, confident ride quality makes it well-suited for the fast, rough conditions we’ll face in the Kansas Flint Hills.

To better cope with the sharp flint rock roads, I increased the amount of sealant in both tires, enough so the weight benefit of running tubeless is pretty much negated. On the flip-side, by increasing the amount of sealant, the tires’ ability to seal up multiple punctures without needing my attention is increased. That’s a good thing.

I also made sure all of the wear items on the bike are in good condition going into the event. This meant a fresh set of 45c Riddler tires from WTB, the aforementioned boatload of (home-brew) sealant, a new Shimano chain, fresh cables and housings, and new metallic brake pads for my old-school Avid BB7 brakes. I also took the time to replace a couple broken spoke nipples in the rear wheel that could have compromised the strength of the wheel.

The ‘Kanza will expose any gear weakness, but I’m confident everything is in tip-top shape for the start of the race. 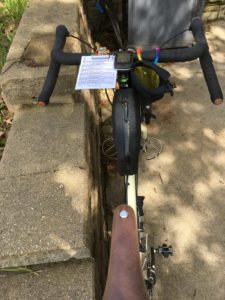 A SnakPak from JPaks and a Mountain Feed Bag from Revelate Designs carry snacks and small things. Cue sheets are held by a custom holder. Fork blade mounted cages allow MG to carry four large bottles on the bike.

I’ve completed the Dirty Kanza using a wide variety of frame bags, including a full frame bag in 2011, but this year I’ll go without a primary frame bag. Instead, I’ll be running smaller bags for snacks and stuff that needs to be immediately accessible.

Tools, spare links and one tube will be in a small Jandd seat pack, and I’ll have two additional tubes and a Dynaplug Micro-Pro tubeless tire repair kit in the pack of the downtube-mounted King Cage Kargo Cage. That means I’ll have the ability to fix more than five flats at any given time. Kansas flint rock is sharp and notoriously hard on tires, so it pays to come prepared to fix more than one flat.

That said, I’ll only need to install tubes if my tubeless sealant completely fails, which isn’t likely to happen. 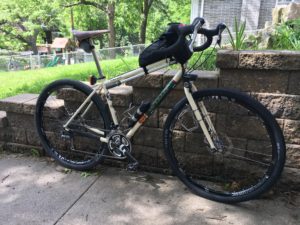 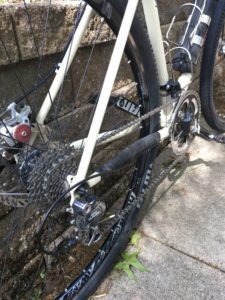 A Shimano 2×10 drivetrain pairs an 11-30 cassette with 34/46 chainrings. While a bit out of fashion, Avid BB7 disc brakes provide reliable, consistent braking. 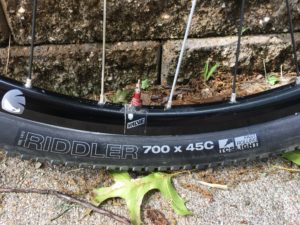 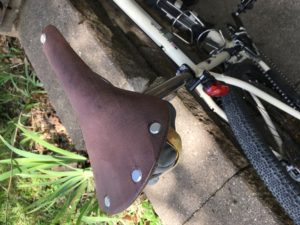 A Brooks C17 Cambium saddle and Moots titanium seatpost do a good job of minimizing the bumps and vibration that reaches MG’s back side.

Check back the week of June 5 to see how I did in my seventh run at the Dirty Kanza 200.