Gravel Grinder News has a few tidbits for you today including a new gravel “adventure” bike from Rocky Mountain and some tire news from Donnelly. Let’s dive right in….. 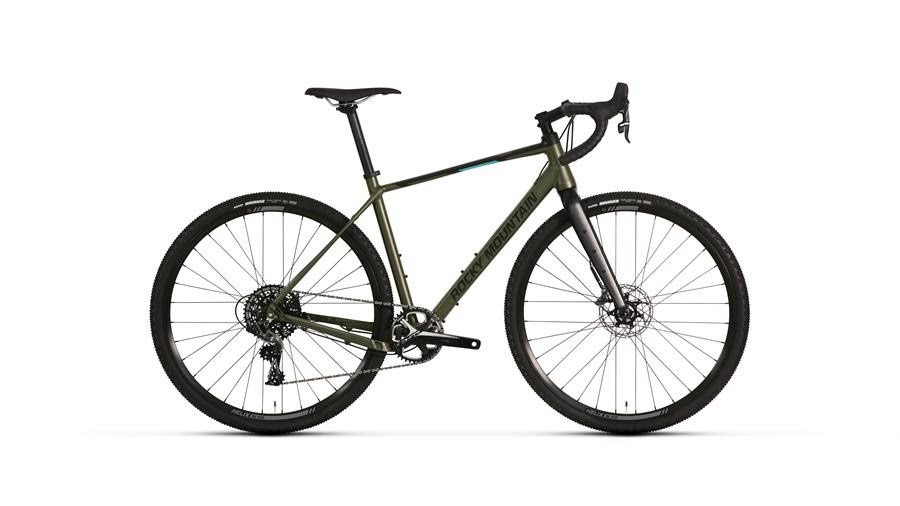 Today Rocky Mountain Bikes introduces its take on a gravel/adventure/all road bicycle dubbed “Solo”. The bike will be offered in two levels, the Solo 70 and Solo 50, both featuring RM 6061 alloy frames with tapered steer tube carbon forks. Both RM Solo bikes are said to be 1X specific and will feature drive trains by SRAM. Interestingly, both Solo models will feature the capability to utilize “full length dropper posts”, which should be no surprise coming from a company with its roots firmly in mountain biking. Standard 30.9mm seat posts are equipped with the bikes out of the box though. A dropper post would be extra. 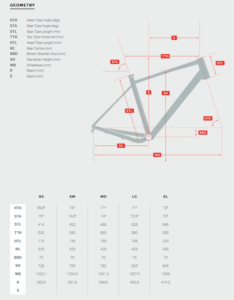 Both Solo models will feature flat mount brakes, short, 425mm chain stays with the dropped right side stay to allow for bigger tires and still clear a chain ring sufficiently. Rocky Mountain claims their “yoke” in this area of the frame is unique, but it certainly looks a lot like things we’ve seen done on several other frames of late. Tire clearance is listed as being 700 X 45mm or 650B X 2.2″. Fender mounts, rack mounts, three water bottle mounts on the frame, and “Three Pack” bosses on the carbon fork point to versatility for the owner of the Solo 70 or Solo 50.

Geometry is a bit more radical than many gravel bikes being slacker and still having a low-ish bottom bracket. Head angles are, from XS- 69.5°, Sm-70°, M- 71°, L- 71°, and the XL being 72°. Bottom bracket drop is 70mm across the board. Bottom brackets are FSA BB386, by the way, which is a press fit type. Cables are also internally routed. Through axles in 12mm on both ends as well.

The Solo 70 will be equipped with a SRAM Force 1 group featuring hydraulic brakes and an FSA Gossamer crankset with a 40T chain ring. The Solo 50 will feature a SRAM Apex drive train also with hydraulic brakes and the same crank set. The bikes will be offered in three colors for each model. Rocky Mountain says the Solo 70 and Solo 50 are available now at Rocky Mountain Bicycle dealers. Prices are as follows: 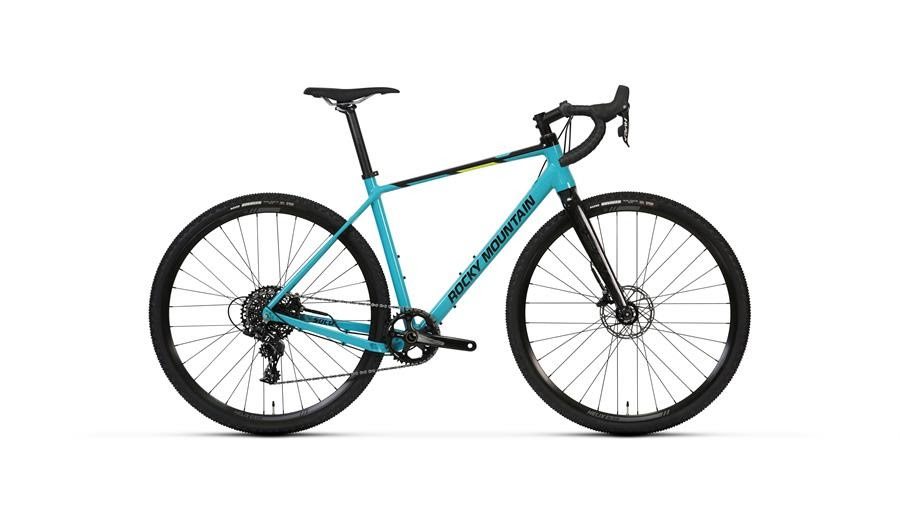 What We Think: Rocky Mountain makes a gravel bike? Well, yes, they do. While what that says in terms of the genre’ at large can be debated elsewhere, all we will say is that Rocky Mountain seems to have designed a rather interesting rig here. We like the geometry, the multiple carrying points, and the ability to run two different wheel sizes. The dropper post compatibility is kind of odd, but coming from Rocky Mountain, well, we get it. However; it means you get stuck with a 30.9mm seat post out of the box on an aluminum frame. Hmm.…. We’re not really sure that is going to promote a comfortable, long day in the saddle. We’d love to be wrong about that though. Also very mountain bike-ish- the 1X only frame. We’re not sold on the front derailleur’s imminent demise, so this isn’t a feature we are stoked about. Not that 1x drive trains are bad, but the limitation is.

Donnelly Tires Expands 650B Range: In response to the increase of interest from OE manufacturers and riders in the 650B tire size for gravel/adventure riding, Donnelly Tires has announced the release of a couple of interesting 650B tires. The ever popular MSO is going to be one of those tires which will be available soon. Coming in a 650B X 36mm and a whopping 650B X 50mm size, this tire should be an instant hit on gravel. Both models of the MSO 650B will be tubeless ready and retail for $67.00USD. 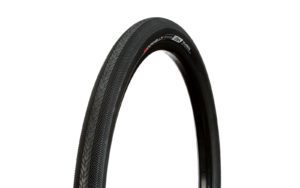 The other tire model making its debut for Donnelly in 650B will be the X’Plor Strada USH. Coming in both 650B X  42 and 650B X 50, the tire tread features a smoother center tread strip which promotes fast rolling and a diamond studded shaped side strip flanking that center on each side for secure cornering grip in looser dirt or on gravel. The 650B X 42 will be offered in wire bead, folding, and tubeless ready variants. The 650B X 50mm tire will hopefully be available tubeless ready, but unfortunately the press release did not specify that it would be.

Price for the 650B X 42mm tire in the tubeless ready variant will be $67.00USD and should be arriving in the US soon. Tires purchased through Donnelly’s distributor, www.pronetcycling.com, will also come with a free copy of Nick Legan’s “Gravel Cycling“, which we reviewed here.

A New Event Announcement:  unPAved of the Susquehanna River Valley– On Sunday, October 14th, 2018 a new event inspired by a couple of the pillars of gravel grinding will take place in Pennsylvania. Dubbed the “unPaved of the Susquehanna River Valley”, the event will take in 120 miles of “raw roads” and treat riders to spectacular fall foliage and 10,000 feet of climbing. 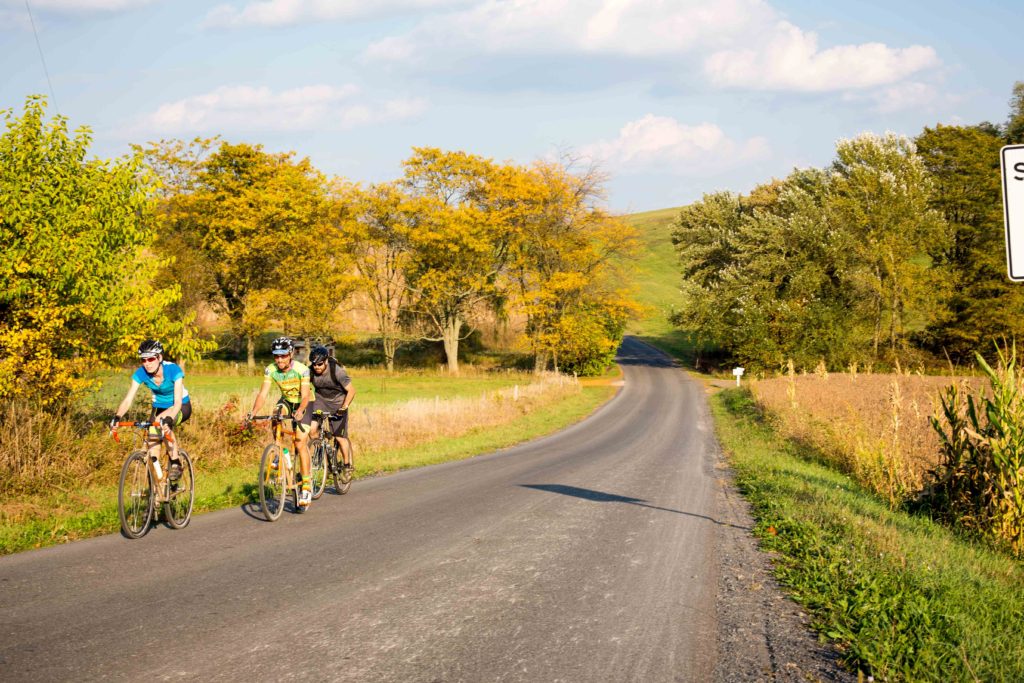 The innaugural “unPaved of the Susquehanna River Valley” will treat riders to some spectacular fall views in Pennsylvania. Image courtesy of unPaved

This event was conceived by Dave Pryor and was inspired by his attendance of a couple of icons of the gravel cycling scene. “I’ve done massive rides like the Dirty Kanza 200 and Rebecca’s Private Idaho,” said event organizer Dave Pryor. “I finished each event with a full heart from the hospitality of the people of Kansas and Idaho — and tired legs from the amazing terrain of both. Having lived in Pennsylvania for over 20 years, I’ve found those same qualities natural to the Susquehanna River Valley. When the riders reflect on unPAved of the Susquehanna River Valley they will have deep feelings of accomplishment and community. It’s going to be a special event.”

Riders can look forward to the following from unPaved:

You can keep up with the latest news on this new event by checking the following links:

That’s it for this edition of Gravel Grinder News. If you have anything that would be pertinent to feature here, you can e-mail us @ guitarted@ridinggravel.com or ben@ridinggravel.com