The Deerfield Dirt Road Randonnee (D2R2) is a very popular ride in Massachusetts that took place this past Saturday, August 23rd. The ride is Franklin Land Trust’s major fundraiser for the year and it was the 10th year. Bringing in over 1,000 riders each year, the D2R2 offers riders some great route options.

We’ve collected a list of the 2014 pictures, reports, info on this year’s D2R2 for your reference for this year and beyond. If you have anything to share about this year’s ride or questions about a future ride, head over to the D2R2 on the Riding Gravel Forum thread. 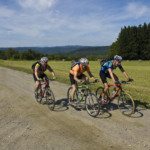 D2R2 from 9W magazine on Vimeo.

“The Deerfield Dirt-Road Randonnee was conceived in the 1990’s as just a favorite dirt-road loop in the hilltowns of Franklin County, Massachusetts.  Since its birth as an organized event in 2005, many have hailed D2R2 as the hardest, most beautiful, most fun, most traffic-free, most unique, and overall best ride that they have ever done. However, D2R2 will continue to maintain its original character as just a bike ride:

Is there something that you’ve found that you think should be shared? Do you organize an event and want a post similar to this one, please let us know by contacting us.

Discuss and share information and experiences about the D2R2 by reading or contributing to the D2R2 thread on the Riding Gravel Forum.

I created Ridinggravel.com in the fall of 2013 and happily joined with Guitar Ted in late 2014 to form the current day Riding Gravel. Originally from Wisconsin, my wife, 2 kids, spent several years in Colorado, before spending a couple years in North Dakota. Now we're back in Northern Wisconsin in the middle of an Outdoor Mecca.
View all posts by RGBen →