You are here: Home > Getting Rolling: Raleigh Roker LTD
By Guitar Ted on October 28, 2015 in Gravel Bikes, Gravel News, Reviews 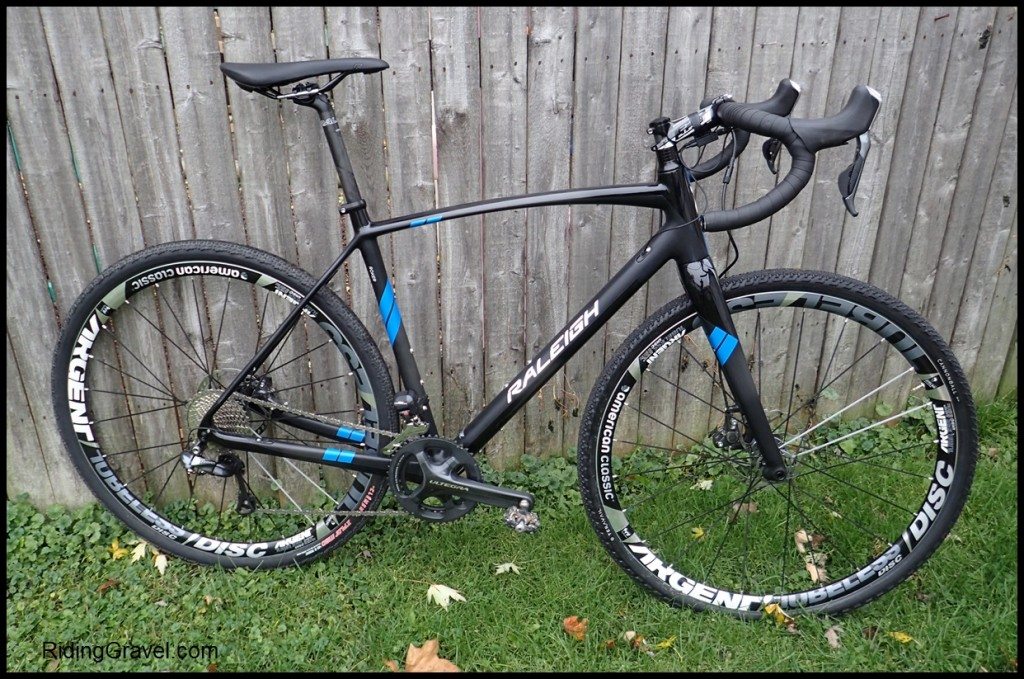 Getting Rolling: Raleigh Roker LTD- Back in April we got an exclusive look at the Raleigh Roker carbon gravel bike, (seen HERE), and it was hinted at the time that a special, limited run version with Shimano’s Di2 shifting bits would be made as well. Raleigh made good on that promise and here it is: The Raleigh Roker LTD. The Roker LTD sits at the pinnacle of the Raleigh range for gravel/”all weather bikes”, and is decked out in some nice things. Here’s what Raleigh has to say about the bike:

It’s everything the Tamland started wrapped in a lightweight carbon chassis with Thru-Axles.  (With) Clearance for tires bigger than 40c this Roker has Shimano Ultegra Di2 with Hydro Disc Brakes for consistent braking no matter the conditions

Not only has the Roker LTD been set up with some fine components, but we’re sweetening up the deal by setting up those American Classic wheels with the new Teravail Cannonball 38mm tires we just introduced on test here. Following are some images of this new test rig to check out…… 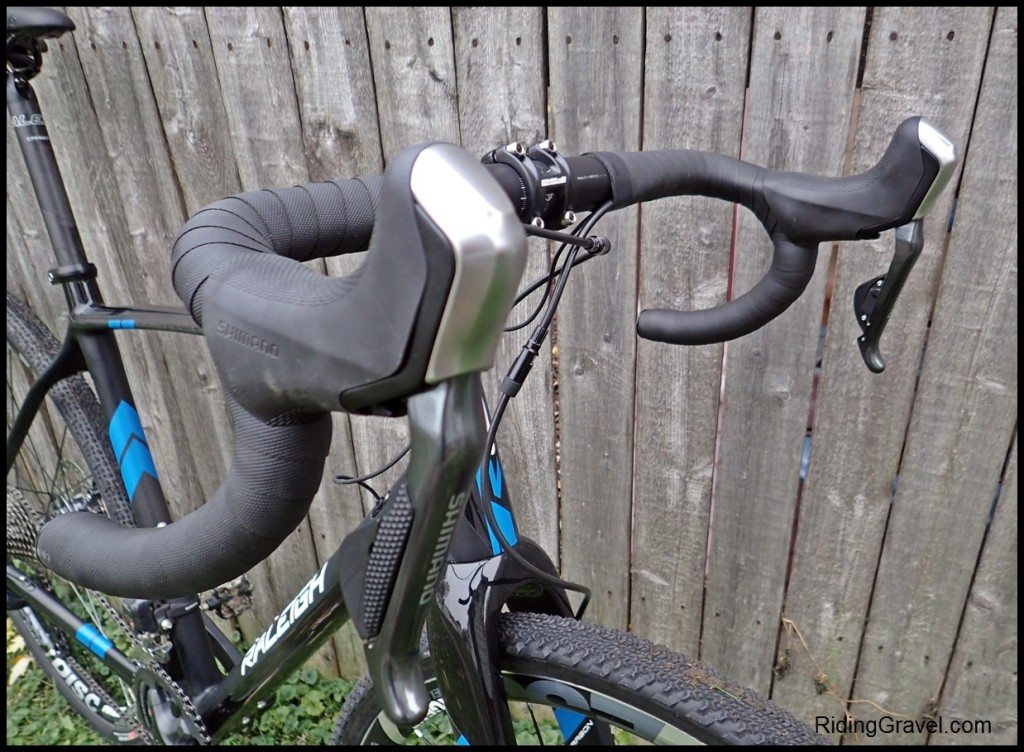 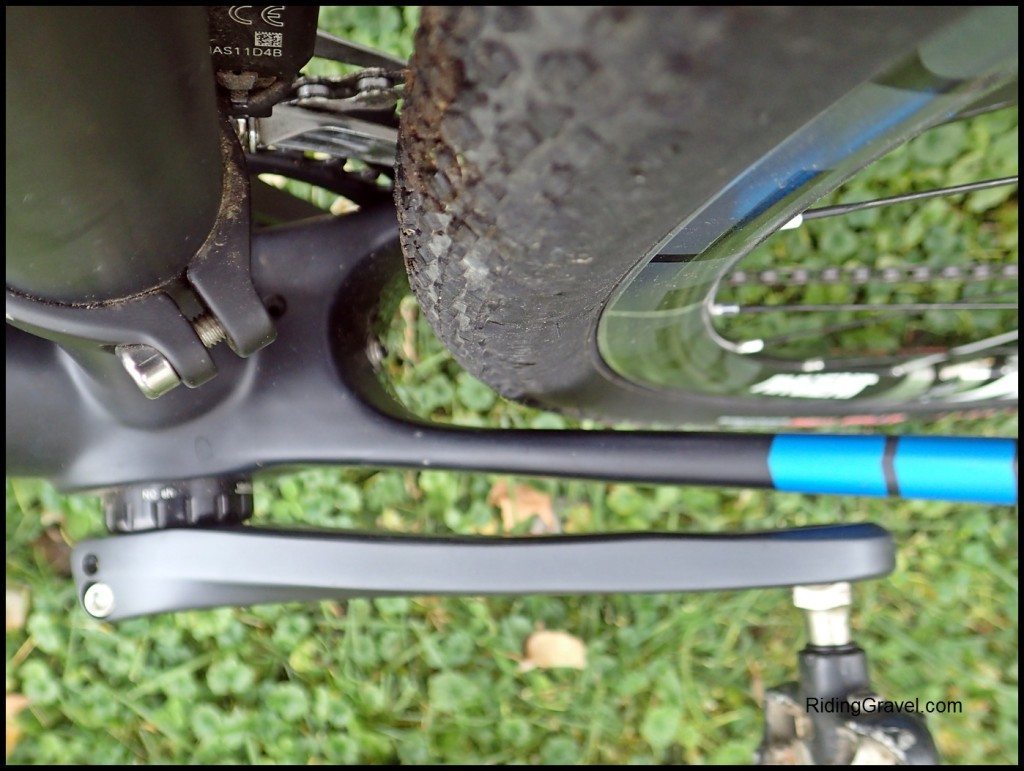 The Roker LTD has clearance for 42mm tires and uses a threaded bottom bracket. 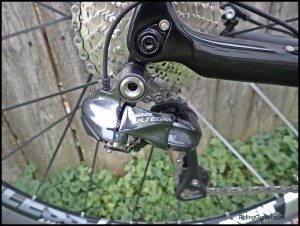 Ultegra Di2 has evolved to look a bit less clunky.

Besides the obvious Di2 and aforementioned American Classic tubeless ready Argent Disc wheels, the Roker also has a flared drop bar which is a bit like a Salsa Cowbell, only that with this Raleigh branded bar, the hoods are not canted outward. The extensions sweep at a nice, reasonable 12°. There are through axles on the front and rear of the Roker series bikes and Raleigh has also fitted three sets of water bottle bosses on the bike for longer distance rides. Raleigh has also fitted the frame and fork with hidden fender mounts should you want to attach full coverage fenders. Braking is handled by the excellent Shimano hydraulic brake calipers and six bolt rotors. The Roker also features an FSA stem and Raleigh’s own carbon seat post which houses the internal Di2 battery.

As stated in the Raleigh quote above, the Roker shares its geometry with the Tamland which came before it, only with one exception. In an ironic twist, the carbon manufacturing process limited Raleigh by forcing the bottom bracket a bit lower than a Tamland’s is, which is actually a good thing for a gravel bike anyway. This 56cm example has a claimed bottom bracket drop of 75mm. This is something we will be double checking on and we will post the results in the next update on this bike. The bottom line is that we liked the Tamland and the expectation here is that the geometry will work well. 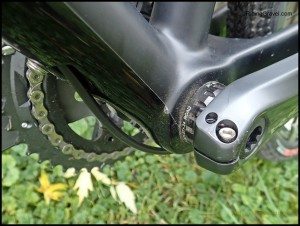 Here we can see how the frame’s downtube is almost as wide as the bottom bracket. Also note the clear frame protector material on the down tube.

Both the frame and fork are Raleigh designed and the frame uses Raleigh’s “Direct Connect” tube to tube construction, which they have been using on carbon road and mountain frames for several years. The tube profiles are anything but round! That’s pretty much par for the course these days with carbon, but the dramatically flattened top tube and thin, flattened area behind the seat tube where the seat stays join are two spots that are rather eye catching.

Raleigh also saw fit to include a clear material in specific areas which is intended to protect the frame from rocks and debris. You will find a long, large strip of this on the underside of the down tube, there is some of this on the  under side of the chain stays, and a bit is wrapped around the back end of each of the rear drop out areas. Kudos to Raleigh for the foresight to provide some added protection for a bike intended to be ridden in loose rocky conditions.

The fork has the typical beefy looking blades and crown. There is plenty of room around the stock 40mm Clement MSO tubed tires here, and I should also mention that there is plenty of room around the rear tire as well for mud and debris to pass by that voluminous tire. The seat stays are somewhat flattened, but not spindly. The chain stays look beefy, but not ridiculously so. Over all, the look is sleek and the frame’s graphics are understated and tasteful. 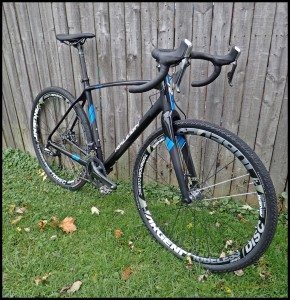 The Roker LTD is 20lbs even with my ancient Ritchey pedals ready to ride. Again, this is for a 56cm frame. Not incredibly light, but there really are no “weight weenie” parts here. For comparison’s sake, a 58cm Carbon Warbird decked out in Rival 22 Hydraulic weighs slightly north of 19lbs without pedals, so this bike is really at the forefront of its category in terms of weight.

So Far…. The Roker LTD strikes a familiar pose for a lightweight, carbon fiber road rocket, only it has big, beefy tires and disc brakes. With geometry borrowed from the Tamland, we expect great things here, especially at a weight of 20lbs. There is a lot going on here, so stay tuned for more in the Checkpoint post coming up in a couple weeks where we should get a better handle on how the Roker LTD does out on the gravel roads with all this fancy pants componentry.

Note: Raleigh Bicycles sent over the Roker LTD at no charge for test/review. RidingGravel.com is not being paid nor bribed for this review and we strive to always give our honest thoughts and views throughout.