Editor’s Note: This post, written by John Ingham, follows up his debut contribution (seen HERE) with a thought provoking piece on “gravel non-racing”

I was chatting recently about the gravel scene with the owner of a coffee shop that caters to cyclists.  Gravel racing, he noted, started out as a homegrown affair, as much about having fun with friends as it was about racing.  “They are racing, but not really racing,” he mused.  Smiling, he corrected himself,  “Well, they really are racing.” 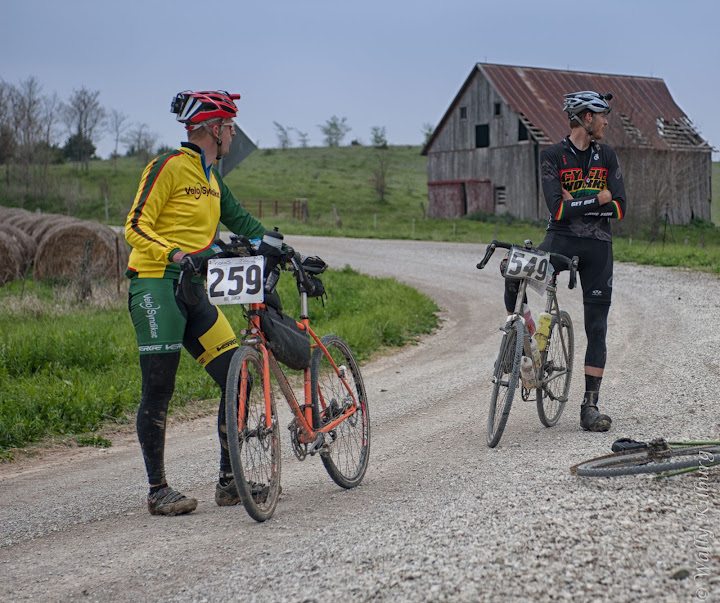 Racers in Trans Iowa v8 not racing, or something…… (Image by Wally Kilburg)

Even now the Dirty Lemming starts and ends in Jim Smith’s front yard, with brats off the backyard grill and homemade brew for participants, and funky little trophies for all sorts of riders, not just top finishers.  Still, it’s a race.  The best riders go like bats out of hell, and everyone else pushes hard.  The Miesville 56 is not a race according to the organizers and, indeed, there is no score keeping.  The idea is to “just ride.”   It seems, though, that just riding and racing can be nearly one and the same thing. 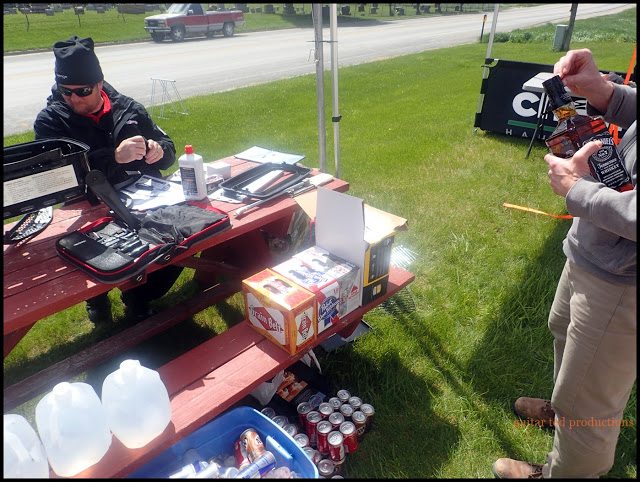 Prepping the goodies, fried bacon, beer, and whiskey for the riders at the Cherry Grove checkpoint for the Almanzo 100

I experienced non-racing racing in my first gravel race, the Box of Frogs.  Having failed to get good directions from the blog—not reading directions has been the bane of my existence—I was late to the starting line.  Once underway I lost more time with navigation problems and an ignominious fall into a deep, gelatinous mud puddle.  Finally, it seemed I might be getting into the race, or at least gaining on the stragglers.  But it was not to be.  A turn on the cue sheet was nowhere in sight.  Feeling hopelessly lost, I was about to call my wife Mary for rescue when along came a mountain biker plastered with as much mud as I was.  It was Dr. Lucien Gonzalez returning from the 100-mile version of the race.  Lucien was lost too, or at least frustrated with the cue sheets.  Lucien was going to program the smart phone for a fast route back to the start.  Without considering what “fast” might mean, I asked if I could follow.  “Sure,” and off we went.  We were supposedly in non-racing mode, but I was suddenly getting a thigh-burning crash course in serious cycling.  Knowing I would be lost again if I got dropped—and that was beginning to seem like a distinct possibility—I pushed the pedal to the floor just to keep up.  It’s possible that I have worked harder climbing mountains but can’t say for sure.

During the 2016 Almanzo 100 I rode with Suzanne Zaayer for much of the first two-thirds of the race.  Before getting to the starting line, she had put in 40 extra miles just for the hell of it even though it was brutally cold and windy.  Yet, we moved at a good clip, and she hammered the steep, twisting down hills like there was no tomorrow. 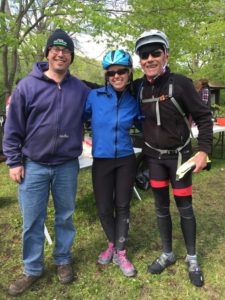 But seeing a nice view, she stopped and ambled to the top of a hill with her camera—not the sort of woman who forgets to smell the roses.  Back on the bikes it was as if we were racing again.   Not all that concerned about finishing the “race,” Suzanne called it a day at Forestville, where her husband was serving hotdogs and where they were camping.  Her bottom bracket was clicking, and anyway, she had already done more than a 100 miles.  Incidentally, Forestville State Park is a popular camping area for Almanzo racers and their families.  Every year the “Radmanzo” campers start and end their own “race” at Forestville; paradoxically, they start both way ahead and way behind the racers at the official start in Spring Valley.

Mary was not in shape for our second Riotgrravel.  Poking along, we consoled ourselves with thoughts of lanterne rouge.  Until, that is, we rode by the three young women who had stopped for a dip in the Canon River.   Arriving at the finish well after us, they collected their prize, a potted flower.  The river valley was idyllic, to be sure, but was the river that inviting or was the dip calculated to win by not winning?  You will have to ask them.  I heard about a race where the top riders were so engrossed in playing Frisbee with their children that they were late getting off the starting line.  At the third checkpoint of the Dirty Lemming I met a rider who had missed a turn and put in seventeen extra miles before getting back on course.  After some cold watermelon, small talk, and kindly urging me to hydrate, he bolted out of the checkpoint and hammered the last third of the race, with no chance of winning or placing.

And then there is the beer and whiskey.  You need a heads up about this if you are contemplating getting into gravel racing.  It’s par for the course.  I was with two young guys at the tail end of the 2015 Heck of the North stragglers when we came upon the good neighbor’s makeshift beer stand at 92 miles.  I waited patiently while my co-riders savored their Buds.  And there were other riders in lawn chairs who looked like they were in no hurry to get back on their bikes.  I heard later that they called their wives for pick-ups.  With ninety-two miles under their belts and a mere fourteen to go, cold beer and lawn chairs were glory enough!  At Fillmore during the Filthy 50, I passed many riders who stopped for beer and whiskey.  At Cherry Grove in the Almanzo riders were greeted with a jug of whiskey.  A few of them looked like they were dropping out, or maybe just dropping.  A good racer needs strong quads, but a good non-race racer also needs healthy kidneys and good sphincter control!

What is this racing that is non-racing or non-racing that really is racing?  The question could be grist for a campfire discussion some evening, but meanwhile here are some thoughts, for what they are worth.  It seems to me that running and moving on wheels are some of the most pleasurable things we do as children.  Have you noticed the joy toddlers have when running as fast as they can or when coasting pell-mell down the driveway on their little four wheelers?   Or how children delight in racing each other on foot or bikes?  For many of us gravel racing is about the pleasure of riding and testing ourselves, and it gets better yet with camaraderie, brats, hot bacon, and a beer or two, no matter how well we do.  Winning has to be a great experience, and a personal best can make a day, but just participating can be good enough, even when we call it quits at Forestville, Cherry Grove, or the Good Neighbor Free Beer Joint.  In any case, I suspect we reconnect with innocent, happy parts of our selves when riding gravel, and all the more so when we go fast with others in beautiful places. 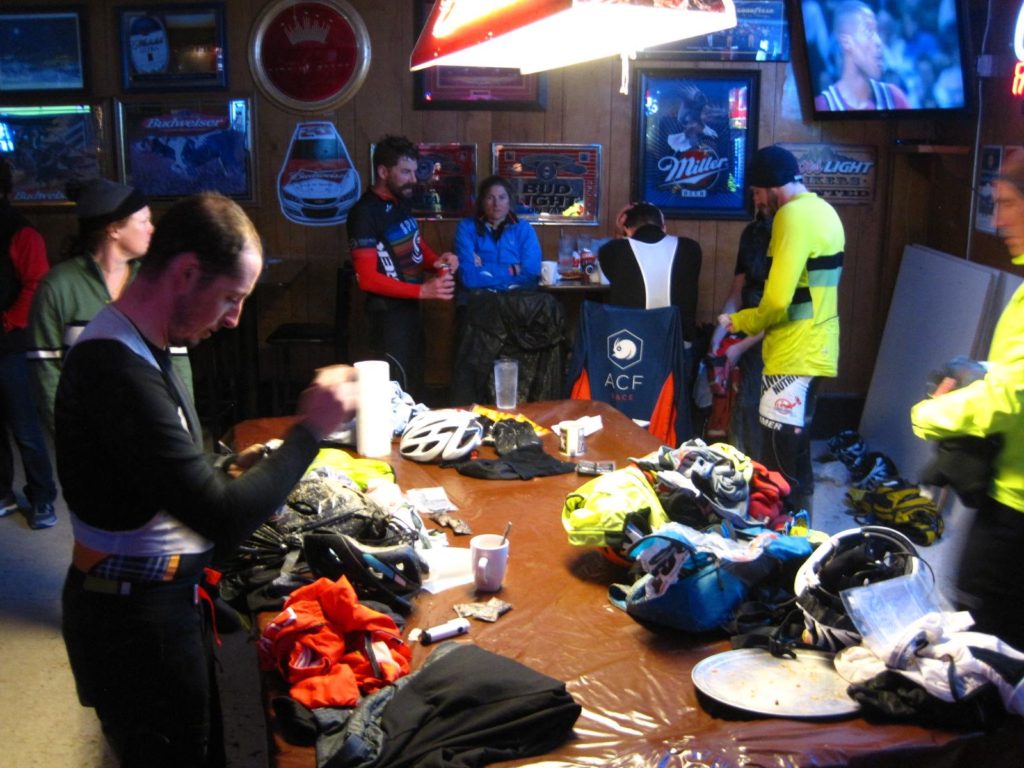 It also seems to me that riding gravel can help us connect with the better part of social life.  Competition is as American as apple pie.  But it takes different forms.  The so-called  “rat race” is surely competitive and it certainly can have its rewards.  But it does not necessarily bring happiness.  In the real world of economic and professional competition, losing or failure can be damaging to self-esteem and threatening to basic security.  Even the most successful can worry about whether they are successful enough.  And the deck is often stacked against people in various ways.  The rat race can divide us and, taken to extremes, it can even undermine democracy and the common good. 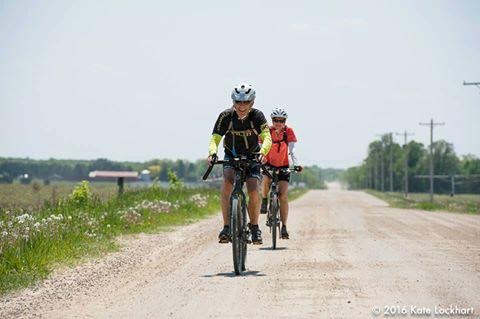 John (front) and Mary at Riotgrrravel. Image by K Lockhart

Non-race races remind us that competition is more satisfying when it is playful and fair.  And they remind us too that community and the game itself are ultimately worth more than winning.  Perhaps this is why Fourth of July celebrations and countless town and city festivals feature fun races—foot and bike races, for sure, but also frog races, duck races, gunny sack races, and even coffin races.   In fun races it is easier to appreciate community and to take satisfaction in doing our best even when our best falls short of winning or placing.  In gravel racing, economic, social, and educational differences are irrelevant.  One does not need expensive gear.  Dedicated gravel bikes can be helpful, but less so than you might think, and almost any bike will do as a starter.  Finishing positions and even just finishing are mostly a matter of strong hearts and leg power, fortitude and will power.   We admire the top riders for their skill and strength, but we also admire the last across the line, for hanging in there and for suffering as much as or more than the winners.  Such is the point of lanterne rouge.  There is a deep affinity between this playful, egalitarian competition and democracy.  Is democracy at its best not a game in which our common bond of citizenship and the game itself are more sacred than how well we do or what the system does for us?  It is perhaps not coincidental that we sing the National Anthem before sporting events.  It suggests that we are—or should be—bound together in mutual respect and affection even as we relish struggle and competition.  In a nice touch, Jim has someone sing or play the National Anthem at the start of the Dirty Lemming, and in other ways as well he, his wife Suzanne, and their neighbors cultivate an atmosphere in which there are no losers.  I finished my first Dirty Lemming almost last but with the cowbells clanging away nonetheless.  Lucien Gonzalez was there, having finished a couple of hours earlier.  As I stepped away from the bike, he called out, “I know you!  We rode together in Box of Frogs!”  And he gave me a big hug.  It was a sweet moment. 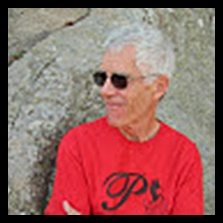 John Ingham is Professor Emeritus of Anthropology at the University of Minnesota. He rode a hybrid bike on trails for years. When he retired in 2011, he renewed his earlier passions for rock climbing, mountaineering, and back packing and began doing longer rides. He has been gravel racing for two years and has completed various races, including the Heck of the North, the Almanzo 100, and the Dirty Lemming 100. Now 76, he appears to be the oldest rider in Minnesota completing major gravel races.