Gritty Take: The “Spirit Of Gravel Racing”- by Guitar Ted

“Your strength doesn’t come from winning. It comes from struggles and hardship. Everything that you go through prepares you for the next level.”
― Germany Kent

I’ve been around this gravel racing thing for a while. Many of you know my background, but suffice it to say, I wasn’t the first and I won’t be the last to be involved in the gravel riding/racing scene. That doesn’t matter here- who is first and who is last- what matters is that, in my opinion, I’ve been around enough to have a pretty good perspective on a few issues which seem to have a few folks all bound up. The following is my take on these issues, and I realize many who read these words won’t regard them, or care at all for what I say, but frankly, I don’t give a damn. 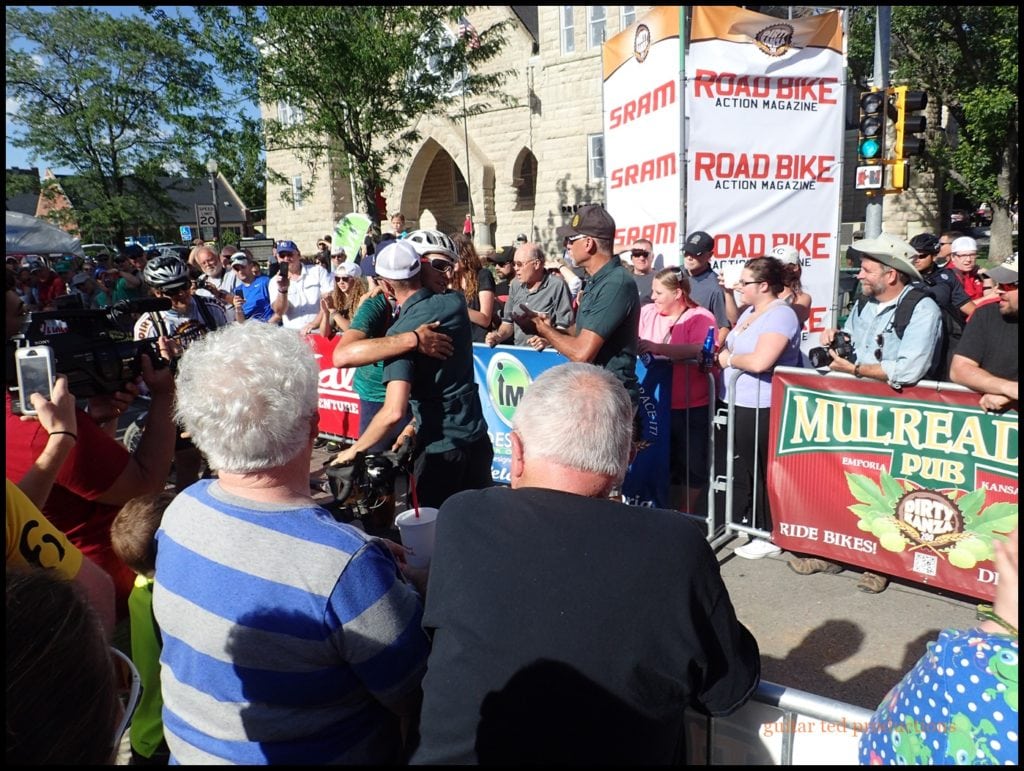 2016 winner Ted King gets a hug from DK Promotions LeLan Dains while Executive Director of the event, Jim Cummins looks on.

The gravel racing scene has seemingly changed a lot since the mid-2000’s, or so the story goes. True, there are a whole lot more people involved, more events to attend, and a cycling industry struggling to make a buck in an era where retail is being dramatically changed forever is focused on gravel. You know, I think more things surrounding the gravel riding and racing scene have changed than anything about the core of it has. The whole of this gravel racing and riding thing is now a complex, varied, and multi-faceted subject which, really, you cannot codify easily. But being humans and all, that is exactly what is being tried here.

The dust up centers around a single event, the Dirty Kanza 200. The event which has billed itself as “The World’s Premier Endurance Gravel Road Race” has been the focal point for media coverage, industry attention, and elite athletes’ curiosity now for over a decade. Two things emerged out of the 2018 event: A concern over the usage of aero bars in competition and what the overall winner of the woman’s category did during the event. Keep in mind that this an issue in one event, and it isn’t even the biggest gravel race in North America. It’s just the one everyone focuses on as the “definitive gravel event”. Whatever that is……..

I made my thoughts known about the two issues in question here concerning the 2018 DK200 on my personal blog. You can read that here if you want. That said, I wanted to speak about the core of this issue, well, I should say the perceived core of this issue. That being the so-called “Spirit Of Gravel Racing”. Some call it “SHARK gravel code of ethics”, and some call it “grassroots racing”, while others don’t call it anything, but they know it when they see someone “selling out”. Some folks waded into these murky waters in an article that was pointed out to me and in the comments made on it. There are some valid points in there. 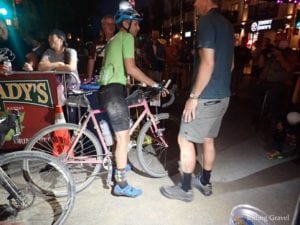 Author and avid cyclist, Nick Legan finishes the 2016 DK200 and is greeted by Jim Cummins. He is not a loser.

In my opinion, focusing on the winners, in the traditional sense, is really what is getting under people’s skin here. There can only be one winner. I know…..we try to spread the love. But there really is only one winner in the traditional sense. The Winner, the first person to cross the line, whatever their gender, whatever bike they are on, and you know what they say about second place. If that is how we are defining what gravel racing is, then what we see in these comments about how  Kaitie Keough won and whether or not aero bars should be used are the sorts of things that will drag us down and take what is beautiful out of gravel racing.

And just what is that? What is the beautiful thing about this genre of cycling? Really, it isn’t anything different than it is in any other form of cycling. In fact, it is core to who we are as human beings. The struggles overcome, that which forges us, bends us, breaks us, and in the end, makes us better than we were. When we seemingly push through to “the other side”, whatever that means to you, is where we get the gold.

The Dirty Kanza 200, and the people behind it, actually go out of their way to celebrate this in their unique way. Take for instance the stream of weary mid-packers making their way down Commercial Street in the dark, well after the “winner” came through. They are getting a heroes welcome. Cheering, cowbells clanging, hugs and high fives from the race directors and volunteers. You’d think they all were winners.

The weary riders then move through the chute, get a few prizes, sign a huge banner, and go on their way. But despite the Dirty Kanza folks efforts to get some goodies into everyone’s hands at the finish, these are not “participation awards”. These are recognition of the struggles overcome, the pushing beyond boundaries, and the new found qualities inside that were hiding in those finishers. Qualities somewhere deep down inside, waiting to come out during a long gravel road race.

In many ways this is what is happening to the gravel racing scene in 2018. We are on a long ride getting forged by buffeting winds of differing opinions. We are struggling now, but if we keep our eyes on what got us here, then we will be okay, no matter how many former Tour de France riders come to join in the dusty fun. They come back for the same reasons we did. To be elevated to the next level by our overcoming of difficult challenges, and all this despite the chip timing, prizing, and finish line hoopla. It’s not “winning” that matters. 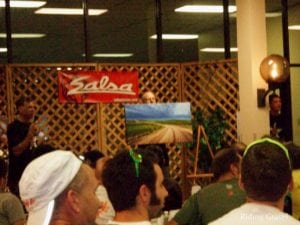 Joel Dyke, DK200 co-founder, holds up the David Pals prize for the rider showing the best attitude through tough circumstances.

Many years ago, I rode in the first Dirty Kanza 200 with a rider by the name of David Pals. He was not what you would call a front runner. However; he seemed to have a knack for finishing, despite difficult circumstances, often with his effervescent smile flashing as he crossed in dead last place, as he did that first year. He caught the attention of Dirty Kanza 200 co-founders Joel Dyke and Jim Cummins for his gritty performances with a smile. This embodied what they felt was important about gravel racing. Sure, there was a winner, and they got their props, but Jim and Joel were on the lookout for that rider that “broke on through” and made it with a great attitude.

This prompted them to introduce the award given for this quality in 2010. It wasn’t about “The Spirit Of Gravel“, or some other cosmic debris. It wasn’t about drafting, aero bars, or team tactics, all of which were present in the early gravel races. It was about growing as a human. Celebrating the results of what happens when we overcome difficulties and draw out things in ourselves we never knew were within ourselves. Do we need a code for that?

This is what has brought all of us together to ride and race on gravel. Devoid of soul sucking rules, licenses, and governing bodies, gravel racing is a place we can test ourselves to see if we have what it takes to overcome. Some of us make bonds with others out there. We grow together, we encourage each other, and in the end, when it works like it is supposed to, winning in the traditional sense doesn’t matter. What we do get is far more valuable than that.

6 Responses to Gritty Take: The “Spirit Of Gravel Racing”