You are here: Home > At the Finish: Cirrus Cycles Body Float Seatpost
By MG on March 29, 2016 in Accessories, Components, Gravel Riding, Reviews

It’s been about three months since the last installment of our test of the Body Float suspension seatpost from Cirrus Cycles, but in this case, no news is good news. In fact, we held off on our final review so we could try it on a few different bikes, with different saddles, and simply get more miles in on the post. 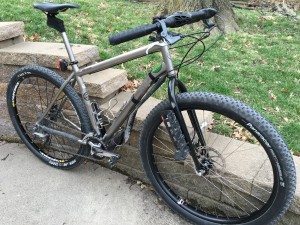 MG’s setup today — the Body Float on his Salsa prototype with a WTB Silverado saddle.

To-date, I’ve run my Body Float seatpost on four bikes: a 29+ Singular Rooster with a RockShox Bluto suspension fork; a Singular Puffin fatbike with a carbon rigid fork; an all-steel Singular Gryphon drop-bar 29″er built for gravel riding; and finally, the bike it resides on today, my Salsa “Bike With No Name” — a custom Lynskey-built prototype of the first Ti Fargo model.

Initially, I ran my Body Float with a Brooks C17 Cambium saddle, and the combination, while heavy, works well. That said, after swapping through a number of saddle options, I’m currently running a WTB Silverado saddle on the post. It shaves some weight off the saddle/post package, and the Silverado shape fits my anatomy well. Plus, the sensitivity of the dual coil spring Body Float post works to erase many of the bumps the “rubber hammock” design of the C17 was also designed to erase. 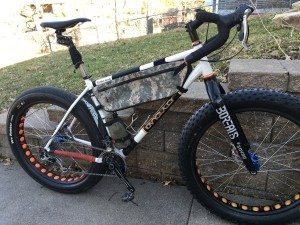 So having both the C17 saddle and Body Float post, while comfortable, could be considered a bit of overkill, particularly from a weight standpoint. In my mind, the Body Float/Silverado combination makes little, if any, concession to comfort, and the weight savings is compelling.

I enjoyed riding the Body Float on every bike on which it was mounted. My favorite bikes for the post are the Puffin fatbike and the Salsa prototype it’s mounted on today. For whatever reason, I tended to like the Body Float post best on bikes with rigid forks. I’m not sure exactly why that’s the case, but it works just fine for me.

Overall, the Body Float seatpost is a benefit on just about any terrain, on any bike. It simply makes any bike ride better. It’s also proven durable in our testing: an important point for a post that carries an MSRP of $415 (for the tested Ti shaft version). That said, the less-expensive carbon ($395) and alloy ($225) versions of the post should be equally durable, as the “guts” of the suspension are pretty much identical across the line.

I tested earlier versions of the carbon and alloy Body Float posts about one year ago for another site and was impressed by their durability and performance. The new Body Float is easier to adjust than the earlier posts I tested however, thanks to the laser etched height scale on the shaft of the post and available no-tools preload adjustment. The design is definitely more refined today than it was a year ago, befitting of its high-end positioning in the marketplace. 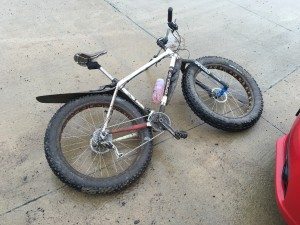 MG used the Body Float post during the I Am Fat race in January, and found it helped him quickly navigate the slimy, bumpy course.

It’s no secret we’re fans of the Body Float seatpost, but you’re probably wondering if it’d work for you. A test ride is really the only way you’ll be able to know for sure, but for Guitar Ted and I, we have been stoked with the Body Float on every bike we’ve tested it on, from fatbike to gravel racer. The ability to stay in the saddle over rough or undulating terrain is a major benefit, especially during long gravel events.

If you’re the type of cyclist that likes to spend long days in the saddle on any terrain, you should probably head on over to CirrusCycles.com and see what all the fuss is about. We’ll keep riding our Body Float posts and will report back if anything significant comes up.

3 Responses to At the Finish: Cirrus Cycles Body Float Seatpost