Here at Riding Gravel we have focused a few reviews on components that provide more comfort and control for riders traversing rough, uneven, or rocky roads. One of those components is the suspension seat post from Cirrus Cycles. Formerly known as the Body Float post, the newest incarnation of this evolved design is dubbed the Kinekt Post. In this article we will reacquaint you with the basics of this design and then tell you what has evolved from the last iteration of this seat post. 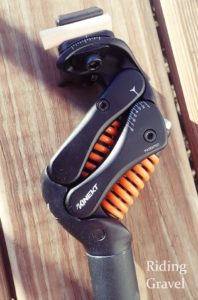 Here you can see the revised upper cradle to reduce the set back of the post.

What It Is: The Kinekt Post is an evolution of the Body Float which MG and I have both reviewed favorably here. (Click the link to see the past review) However; the post had a rather long set back, (saddle position behind the center line of the post) and that didn’t fly well for many riders, including our own MG, who had to be careful what bike he tried it on because it was borderline too much set back, despite his sliding the saddle as far forward as possible in the seat post clamp. MG made a suggestion that the set back issue be addressed, and we are pretty sure Cirrus Cycles heard from other riders regarding this point as well because the last iteration of this post is no longer available.

Now the set back is  around 12mm dependent upon how much pre-load to the springs the rider uses. That’s far more reasonable, but Cirrus Cycles plans on making a zero set back option at some point in the future for those who need that fitting option. Cirrus Cycles also took this opportunity with the redesign to further refine the look of the post, and we must say that it has elevated the aesthetic of the linkage to be rather elegant now. The nice markings for seat post insertion and pre-load of the springs remains. The springs in both the upper and lower links remain replaceable according to rider weight and preferences. There are four different spring rates available to choose from. In the past, Cirrus Cycles offered a titanium shafted version of this post, but this has been discontinued and now aluminum and carbon fiber are the only shaft options available. 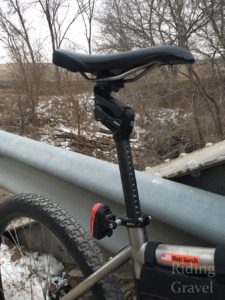 This is the carbon shafted version as seen on MG’s bike.

The Kinekt Post also retains all the familiar features of the old Body Float, the easy to use seat clamp assembly, the seat tilt indicator, and aforementioned pre-load and insertion markings. Rebuild kits are available to allow you to keep the post going, and accessories also are available which include a protective wrap for the spring assembly, seat post shims to allow you to swap one post to different bikes with different seat post sizes, and an upgrade to the pre-load bolt in the form of a knob allowing adjustment of pre-load while you ride. The post also ships with a very detailed set-up and maintenance guide. The accessories and extra springs can all be ordered directly from Cirrus Cycles’ website.

The post Riding Gravel received at our headquarters for review is the aluminum shafted, and heaviest, model. It weighs in at 577 grams with two orange springs installed, which is the heaviest combination for a 27.2mm version. Price on this model is $249.00USD. The carbon shafted model weighs less, 330gm-453gm claimed for 27.2mm size, and cost $329.00USD. MG, our Riding Gravel contributor,  actually has this carbon shafted version and will be doing a review of it for us later. He will be putting that version to the test in the upcoming 350 mile DKXL event in June.

The weight is substantial for these posts, but given that this is an “isolation device” (Cirrus Cycles doesn’t like the term “suspension post”) we have to give some leeway, and as we have learned from our past review of the first version, it is weight well worth carrying around. Will this new version improve on that verdict from our last review? That’s the big question here. 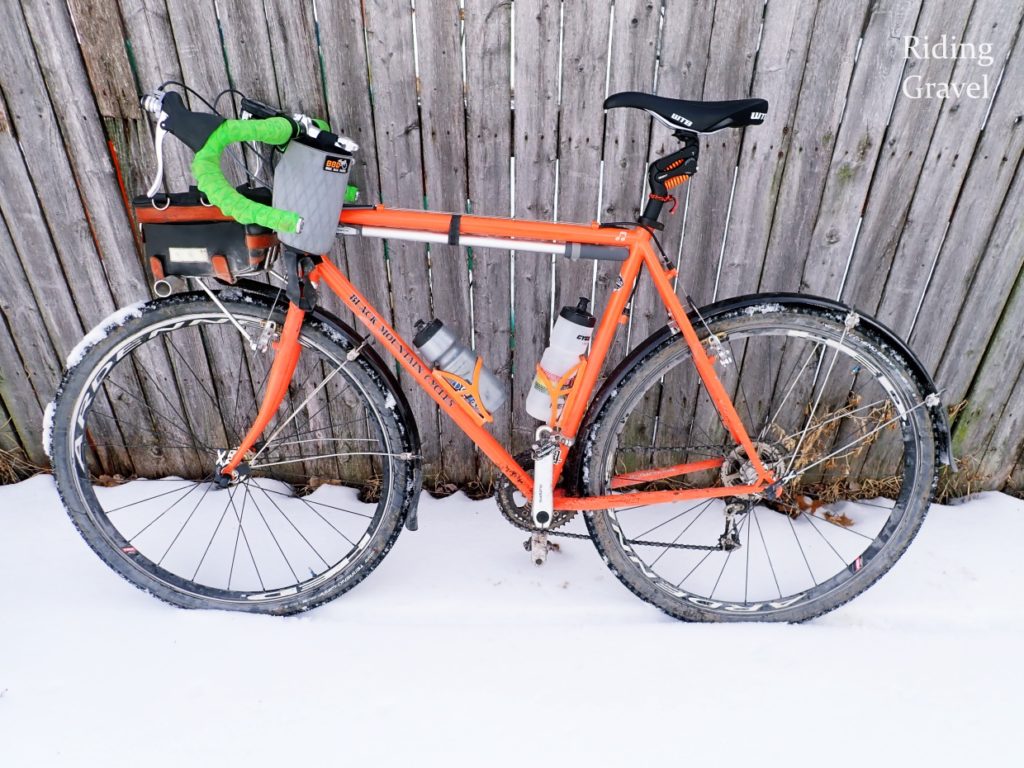 The Kinekt Post has been fitted to my Black Mountain Cycles “Monster Cross” and will be getting ridden out on the gravel soon.

First Impressions: The Kinect Post came in a nice retail, point of purchase box and had the aforementioned very detailed manual which helps you get it set up. I had requested the heaviest springs, but you also get two other alternate springs in the package with which you can use to further fine tune the ride feel.  I mounted my WTB Pure  saddle with no issues and was able to easily get my correct position with the new set back that Cirrus Cycles uses for this version of the post. The seat post clamp on the Kinekt Post is one of the friendliest I’ve used to mount a saddle on.

The hash marks on the cradle really assist you well in terms of getting your saddle tilt dialed in, which is a critical thing to do on this post, since it will sag somewhat under your weight when seated. It can be helpful to have someone assist you with taking down information to get the saddle and post pre-load dialed in when you initially install this post. Speaking of pre-load, the easy to adjust pre-load Allen head is at the rear of the spring assembly and you can easily see how much you dial in using the indicator marks on the lower link.

As we mentioned above, the links have been refined in terms of aesthetics and the whole post looks just a bit better than the previous effort by Cirrus Cycles, which, by the way, we thought was very impressive to begin with. This post looks very refined and professional. We have high expectations for the functionality of it as we move into riding this out in the country here in the Mid-West.

So Far…. Cirrus Cycles most recent take on their “isolation seat post design” has been renamed and refined. The new, shorter set back is appreciated and the post’s entire look has been refined somewhat, raising the bar on our expectations for its ride quality. How the new set back affects ride performance and the post’s durability will both be things we will be looking at in future updates of this review. Stay tuned……

Note- Cirrus Cycles sent the Kinekt Post to RidingGravel.com at no charge for test and review. We were not paid nor bribed for this review and we strive to give our honest thoughts and opinions throughout.