You are here: Home > Supreme Court Ruling Could Threaten Rail Trails
By RGBen on March 10, 2014 in Advocacy

Wow. We just saw this one come across and it seems that the Rails to Trails Program could be in for more expense and less access.  It looks as if there are a lot of issues pending out there. 80 cases with 8,000 other claimants… 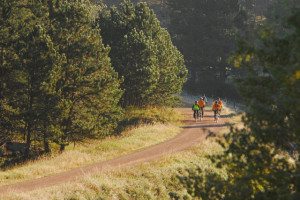 What does this mean for the Mickelson Trail?

The decision could jeopardize the “rails to trails” program, responsible for creating more than 1,400 bike and nature trails, many of them built along railroad rights-of-way.

thousands of miles of bicycle trails or cost the government millions of dollars in compensation.”

I created Ridinggravel.com in the fall of 2013 and happily joined with Guitar Ted in late 2014 to form the current day Riding Gravel. Originally from Wisconsin, my wife, 2 kids, spent several years in Colorado, before spending a couple years in North Dakota. Now we're back in Northern Wisconsin in the middle of an Outdoor Mecca.
View all posts by RGBen →