The market for GPS-based cycling computers has been expanding quickly in the past few years. Garmin’s popular Edge series has been the hands down choice of the masses in the cycling market, but in the past few years that paradigm has shifted. While Garmin continues as a leader in the market, Wahoo Fitness, Lezyne, Hammerhead and others have given us innovative new options to choose from.

The Elemnt Bolt from Wahoo Fitness packs a lot of innovation into a compact, integrated package. The $249.99 MSRP is appealing too.

I’ve used a variety of Garmin Edge units over the past decade, starting with an 200, then a 500, and later a 510. That said, I’ve never been fully satisfied with the performance of any GPS cycling computer I’ve used to date. The idiosyncrasies were different with each model, but have been frustrating nonetheless.

All I wanted (and continue to want) is a computer that’s easy to use, doesn’t lose my ride data and isn’t a pain in the behind to set up. Unfortunately, these are areas where I’ve been left wanting by the GPS cycling computers I’ve used in the past.

Perhaps I should back up a bit… The primary reason I moved from a traditional sensor-based cycling computer to a GPS-based unit was convenience. It wasn’t necessarily because I wanted more, or better, data, or because I needed other more advanced features. Simply put, the appeal of ditching the wheel sensor and having one head unit that could be used on any bike without recalibration was strong. That’s the number one reason I made the leap: convenience. 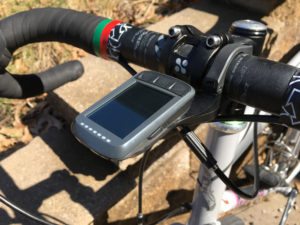 So, with convenience, reliability and ease of use in mind, I embark on this review of the Elemnt Bolt from Wahoo Fitness. The Bolt is the second computer from Wahoo. Compared to the original Elemnt, which is a very full-feature (and full-size) head unit, the Bolt is much more compact and integrated in appearance.

Wahoo Fitness designed the Bolt to be fully wireless, so you only need to plug it in for charging. Otherwise, all controls, options and settings are accessible through Wahoo’s app-based smartphone interface. Through the app, it’s easy to connect the Bolt to sites such as Strava, MapMyRide or others, and once connected, rides automatically upload at completion.

The integrated mount looks equally good on flat bars, and so far has been plenty secure for rough trails.

Connectivity with auxiliary sensors and mounts is easy as well. Since the Bolt is capable of communicating in both Bluetooth and ANT+, you can pair it with most heart rate sensors, power meters and connected trainers (such as Wahoo’s own Kickr).

One of the more distinctive features of the Bolt is its aerodynamic shaping and integrated out-front handlebar mount. Wahoo says the computer/mount reduces drag by more than 50-percent compared to the nearest competitor, which they claim can save up to 12.6 seconds in a 40km time trial, when traveling at 21mph.

Other features of the Elemnt Bolt include:

Wahoo includes one of the aero out-front mounts in the box, as well as a more traditional bar/stem mount, which secures with zip ties. Accessory mounts are readily available on the Wahoo Fitness website, and the company recently announced K-Edge is now making an aero mount for the Bolt. 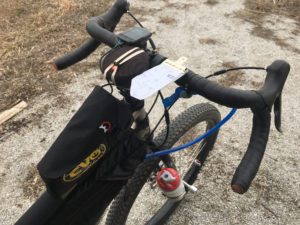 For long gravel races, the bar-stem mount comes in handy, as it allows easy access to the rear-facing charging plug (for on-bike charging).

I have to admit, Wahoo’s aero claims for the Bolt sound great, but my personal gravel bikes have more to do with functionality and comfort than aerodynamics. That said, the smooth look and secure, integrated mounting certainly appeal to me on a number of levels. It’s one of those instances where form and function intersect to bring the entire package to another level.

I’m also quickly becoming a fan of the simple user interface and the easy to use button-based navigation. The Bolt confirms that, at least for me, a touch screen isn’t a necessity, or even a significant benefit in a cycling computer.

I’ll be using the Bolt in my pursuit of a finish in the inaugural Dirty Kanza XL in just over a month, and I’m confident the experience will give me some firm impressions on how the Bolt works for ultra-length gravel events. Check back in June to get that perspective.

Now get out there and ride your bike!

NOTE: Wahoo Fitness sent the Elemnt Bolt for test and review at no charge. We were not paid nor bribed for this review. We always give our honest perspective and opinion based on our actual experience with the product.