Every so often you see a manufacturer focus on a certain aspect of cycling, often not a bike itself per se, but something strongly related to our needs. When that happens, things can get better even if it does not make us lighter or faster or more sexy, etc.

For instance, take Bontrager and their interest in keeping us seen while we are on the road. Daytime running lights. I never ride without one when I am sharing the road with cars. We are small enough as it is and drivers seldom are looking for us as they rush about their distracted way, texting, tweeting, and selfie-ing themselves down the road. Besides wearing bright clothing, a daytime light to be seen by is such a simple, lightweight way to stay alive that to not use one borders on the ridiculous. 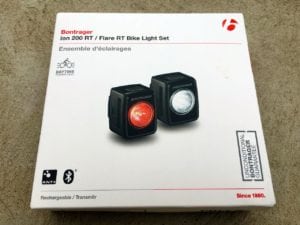 It has been a couple of years at least when I sampled a set of the original Ion 100 R/Flare R City lights. They are barely bigger than an ice cube, weigh hardly anything, and are quite bright. Taking a set of these on a road ride is such a non-issue that even the most image conscious among us should not balk at having them. I used them a lot. A lot! I came to love them really, with the only issue I found being a somewhat lightweight run time, so longer road rides could be iffy if I was out past 4 hours of riding time. What I would often do was carry two sets, one on each side of the stem and two stacked on the seat post. Then, when I had gotten to the red light/low battery warning on the first set, I would run it a bit longer then swap to the fresh one. Not bad, but not ideal. Still, they were really intended for a city environments with the typically shorter run times for commuting, errand running, exercising, etc.

So when a set of the new Ion 200 RT/Flare RT daytime running lights came in the mail, I was stoked. There are some new features included in the more robust models. Obviously we have twice the Lumens in the front light. We also have an ambient light sensor so the new versions will auto-dim or cycle into a different mode when the ambient light changes. You may connect by ANT+ to a Garmin or Bontrager device for “on the go control”. I do not use a Garmin, being a “Wahooligan”, but if I understand this feature, it allows you to let bike motion control the light so when you stop, it knows you are at rest and it either turns off or dims the light. As you are in motion, it turns the light back on. Nice actually, but I could not confirm this. It also has a Lock mode to set the light into one preferred mode. Holding the on/off button down for 8 seconds when you are in any one mode locks you into that mode.

So how do they compare in use to the older lights? Lets see:

What is not to like? About the only thing I can come up with is sometimes the small size can be a liability when bar mounted. The light is so compact and sits so close to the bar, that depending on where you have your computer mount attached, it can block the lights visibility to one side of the bike or another. A light that sits above the bars on a mount will rise above that computer and be seen no matter what. Bontrager does offer other mounts that position the light differently, some of those are a Go Pro type interface, but I get the feeling that they require some integration with other Bontrager parts. Oh yeah, one more thing: The indicator LED for battery status is tiny. Teeny tiny. Lilliputian. So while the good thing is you are not staring at this big ol’ LED all the time, glaring at you in all its status glory, the bad thing is I actually had to shade the light with my hand and squint to see how the status was in daylight.

Kudos to Bontrager for caring enough to focus on this. At $115.00 for the pair, the Ion 200 RT/Flare RT light set is well worth the cash.

NOTE- Bontrager sent over the Ion and Flare lights at no charge to Riding Gravel for test and review. We were not bribed nor paid for this review and we strive to give our honest thoughts and comments throughout. 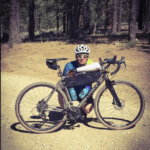